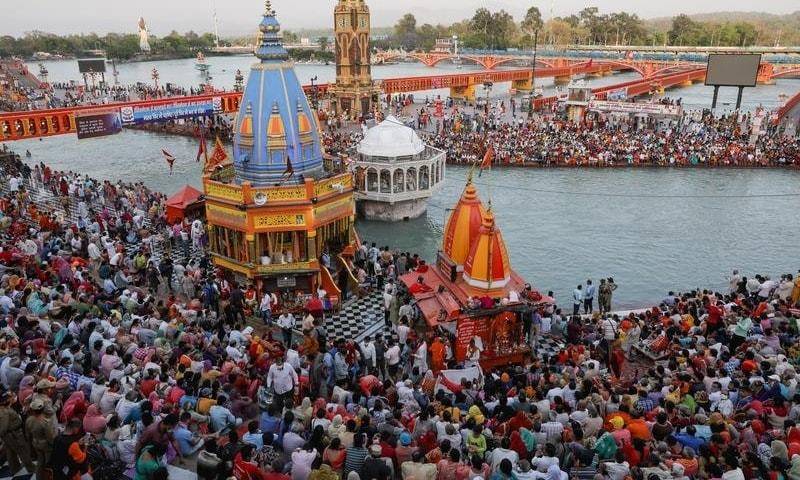 HARIDWAR – Hundreds of devotees have tested positive for novel coronavirus in India's Uttarakhand where huge crowds have gathered to attend the celebrations of the Kumbh Mela festival amid second wave of pandemic that is wreaking havoc across the South Asian country.

Millions of Hindu devotees took bath in the Ganges river, a practice that they believe cleanse them of their sins, on Tuesday to mark one of the significant days of the two-month-long festival.

Official said that nearly one million people bathed in the river located in the in the Himalayan state of Uttarakhand by afternoon on Wednesday.

The major gatherings are being held in the country at a time when it reported 184,372 new cases on Tuesday, the highest daily infections yet.

However, police officials are unable to make the people follow the SOPs introduced by the government to slow the spread of the contagious disease.

The authorities tested more than 20,000 samples in the area on Tuesday and 110 of them returned positive results.

On Monday, 184 devotees had contracted the infection. They have been isolated while others have been moved to hospitals in Haridwar city.

Those who tested positive also include top saints. Narendra Giri, the president of a consortium of 14 Hindu groups, Akhilesh Yadav, former chief minister of neighbouring Uttar Pradesh state and others have contracted the virus.

On Tuesday, Haridwar city reported 594 new cases, bringing the total tally of active cases to 2,812. Between first two days of the week, it recorded more than 1,000 new infections.

ISLAMABAD – Pakistan on Wednesday reported 135 deaths in the last 24 hours - the highest number of deaths in a ...