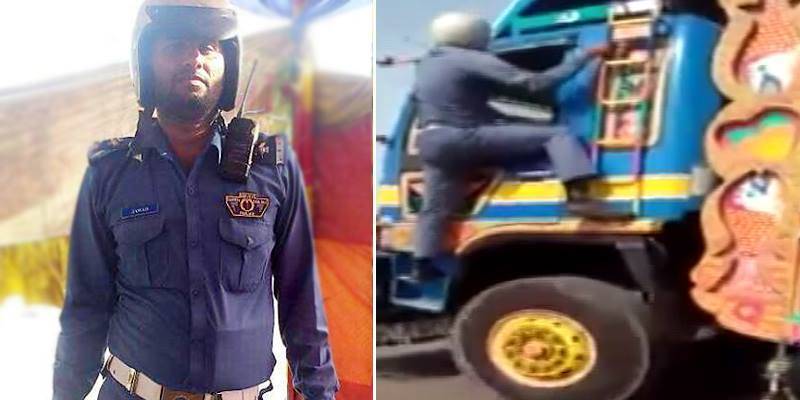 LAHORE (Haider Ali) - A cash prize for the traffic warden who risked his life to capture a hit and run truck driver, a video of which went viral a day earlier, has been announced by the City Traffic Police.

The announcement was confirmed by the warden Muhammad Jawwad Idrees himself in an exclusive conversation with Daily Pakistan Global.

Revealing the whole jaw-dropping episode, Jawad stated that the incident took place on June 1 when a truck rammed into a motorcycle in front of Shahdara hospital Lahore.

Instead of stopping the truck after the collision, the driver attempted to flee the scene. However, the traffic warden present on the spot was informed by the relatives of the injured motorcyclist about the accident.

Living up to the professional competence, the warden started hot pursuit of the speedy truck on his heavy bike. When the truck reduced its speed near Imamia Phatak, the warden sensed that it would be difficult to stop him while riding on his bike.

Here, the heroic warden left his motorcycle and clung to the side of the truck and finally compelled the driver to stop after covering a distance of over one and a half kilometre.

The warden, who is a grade 14 officer of city traffic police Lahore confirmed that he was fasting at the time, and chased the truck but the plight of poor motorcyclists who were hit by the truck served as an impetus to risk his life.

"City Traffic Police officer Rai Ijaz has announced Rs 10,000 for me as cash reward," said Jawwad and added that he faced a lot of criticism from his family members when they saw the video.

Recalling another incident of the same nature, Jawwad told that back in 2011, a lady was hit by a bus and had sought his help to call the police.

However, due to faulty Walkie-Talkie, Jawwad requested the lady to inform the police through her personal phone number.

The lady, instead of understanding the situation, filed a FIR against the warden himself instead of the bus driver following which Jawwad faced a hard time for something he was not responsible for.

The valiant police officer maintained that the incident also forced him to capture the criminal on the spot rather than be victimised again.

In an apparently justified demand, Jawwad sought benefits for the whole traffic police department due to severe nature of the job.