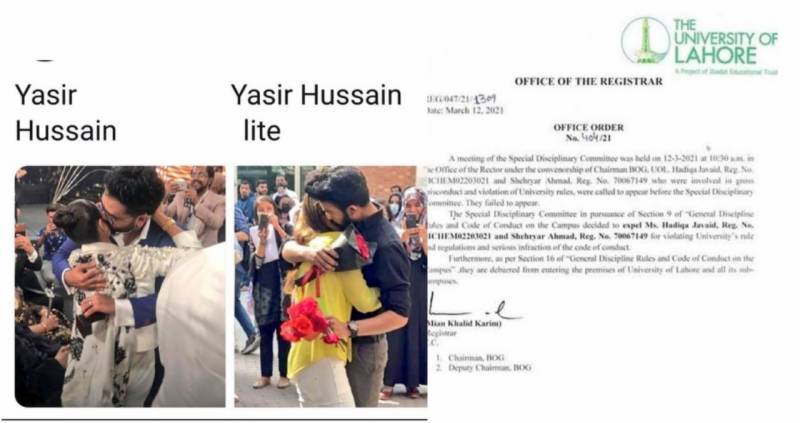 The University of Lahore (UOL) administration has expelled the couple whose public proposal recently went viral and the internet is divided whether expulsion was the right decision or not.

Netizens have gone livid over the University's strong action against the proposing couple, calling the decision too extreme.

The viral video that spread like wildfire was of two students embracing each other after the girl went down on a knee and proposed her beau with the crowd cheering them. After presenting a bouquet of roses to the boy, the two lean into a hug and the clip ends.

Sparking a debate amongst the masses, where one side highly discourages such proposals, deeming the proposal disgraceful.

Others believe that everything is fair in love and war and find the public display of affection empowering and are of the thought that there are a lot of other issues for the university to be concerned with, such as harassment.

A country where pedophiles are defended and protected in the name of child marriage and converting religion of little girls we are uncomfortable with two consenting adults expressing love for each other. We reduce our so called morals to a joke everyday. #UniversityOfLahore

Apply all the rules you want but you can’t expel love! It’s in our hearts, it’s the best part about being young and it what makes life worth living! You learn more about love than you can ever learn at an institution ❤️

PPP leader and the party's MPA from Sindh, Sharmila Farooqi on Sunday threw her weight behind the students by praising the act.

they expelled two students for being in love meanwhile the teacher who sexually harasses students in the campus still stays.

because throwing acid on a girl wouldve been totally acceptable but not this 😃👍🏼 https://t.co/OAiacJnwou

A minority is busy making memes and find the fiasco hilarious Some feel bad for the couple who paid a heavy price.

This is absurd and upsetting on so many levels. https://t.co/hL6NB0nM7E

Expressing love in this country led 2 college kids to expulsion.

But sexual harassers can roam freely. Rapist are given the benefit of the doubt. Animals are shot multiple times.Endangering the lives of women in the Aurat March has no consequences.

No room for love.

I don't wanna live in a world where expressing affection is restricted. George orwell predicted this future in his novel 1984 and he was right. https://t.co/W7CkWkUi5G

Thread: Scenes from the BOG's office after the viral video of the #UniversityOfLahore couple. They expel the students on proposing to each other? There is nothing wrong with proposing someone for marriage. Now some of my fellows will say our religion, culture, values, and norms - pic.twitter.com/1rmNQwxPxu