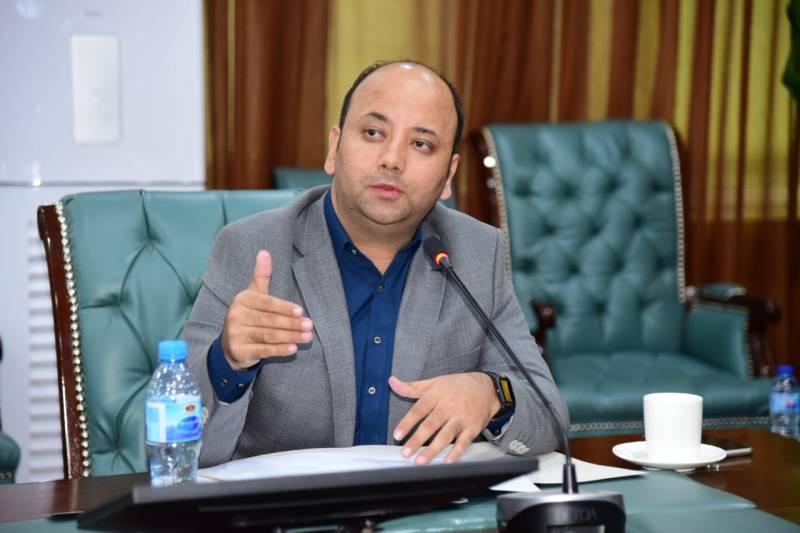 All eyes remain on upcoming polls in Gilgit-Baltistan (G-B), an administrative territory of Pakistan, as the Himalayan region goes to the vote this Sunday to elect the candidates of the 24-member Legislative Assembly for the next five years.

Part of the erstwhile princely state of Jammu & Kashmir, G-B covers an area of 72,921 square km, is a multilingual region with a rich and historical socio-cultural and ethnic diversity. It is surrounded by the Hindu Kush and the Karakoram mountains and has a population of 1.8 million. In addition to Pakistan and India, G-B shares its borders with Afghanistan and China.

For the last few years, G-B has remained frequently in news since it is the gateway of the $65 billion China-Pakistan Economic Corridor (CPEC) infrastructure plan - connecting the Kashgar area in Xinjiang Autonomous Region (XAR) of China to the Gwadar Port in Pakistan runs through this region.

Just two days before the November 15 election, Waqar Abbas spoke in an exclusive interview with Daily Pakistan on how he became Gilgit-Baltistan’s youngest finance adviser in a caretaker setup and what major changes he brought in the remote region.

“I got my basic education from APS Skardu, and completed my bachelors from Sarhad University, Peshawar, where I was among the top three position holders. After my BBA, I applied for IBA and got my MBA degree from IBA Karachi in Finance & Investments,” Mr. Abbas said over a telephone call from his office in the region’s capital Skardu.

After he graduated from the Institute of Business Administration, Karachi in 2010, becoming the first MBA in 60 years of IBA history from Baltistan region, Abbas started his professional career with HSBC Bank Middle East Limited in 2011 as a Financial Analyst.

“In 2012, I got an opportunity to work for an oil company Global Oil Industries (Pvt) Ltd. as Manager, Finance & Operations and also headed its Corporate Social Responsibility Section under the umbrella of Meezan Educational Trust, its work stretched from economic empowerment of ultra-poor, financial assistance for educational programs and school support program.

Meanwhile, Abbas co-founded RangYul Development Foundation, a social venture to assist startups & micro-enterprises to grow by linking them with high-end markets. “I started this venture with a group of volunteers in May 2014. Within a period of 6 years, we have raised the endowment to Rs10 million and working with more than 3000 micro-enterprises to scale and expand their businesses.”

This social venture was among the 12 best social enterprises from Asia selected for President Obama’s Global Entrepreneurship Summit 2015 held at UN Headquarters in Nairobi, Kenya.

In 2015, he got an opportunity to head a USAID Project in Northern Areas of Pakistan. “I was (among) the Youngest Program Manager in USAID Pakistan and also headed one of its Project in Skardu region.”

The same year, he won the US Embassy prestigious Alumni Emerging Leader Award.

He has also represented Pakistan in Iran at the World Leaders Conference, which saw the participation of 400 delegates from 63 countries from around the world.

Waqar Abbas says he joined the caretaker government with a vision for innovative, sustainable and long-lasting growth in G-B.

The 34-year-old assumed charge as the Finance Adviser (equal to a finance minister) in Gilgit Baltistan Caretaker Government 2020 earlier this year in July. 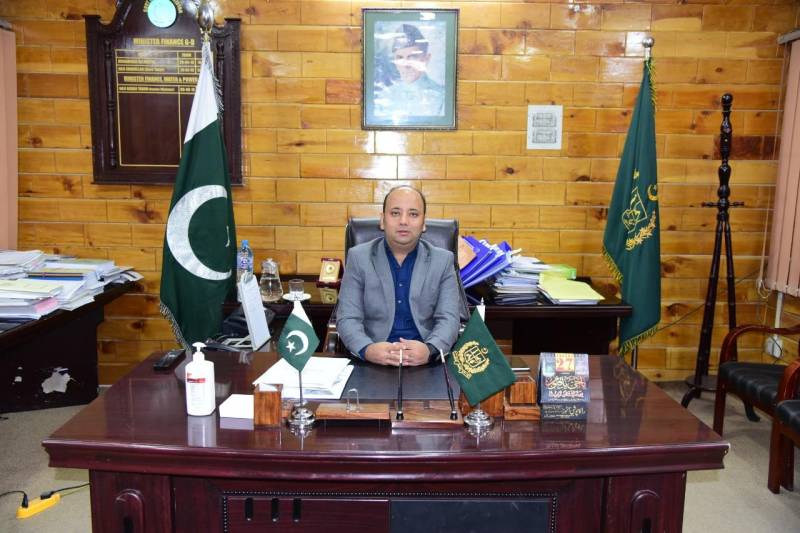 “It was a very meaningful and satisfying experience as the youngest adviser on Finance, especially for the fact that I belong to this region. For a young person like myself, such a position provides huge potential and adds value to a person’s abilities. The only problem is most of our young people do not take part in active politics. I am one of those who have a vision and the will to serve the people.”

“My ultimate goal of life is to empower and train the intellectual brains of Gilgit Baltistan through entrepreneurship and civil society empowerment so that they could give back to society like I am doing.”

“Even before taking the charge, I made it clear to the interim government that the existing model, lacking private stakes, was not sustainable for growth in this region,” Mr Abbas said while recapping his performance during a very short period of time in the office.

Since this region has no revenue base and relies only on the grant from Government of Pakistan allocated in federal budgets, Waqar Abbas said there was a dire need of investment from the private sector to uplift the impoverished region.

“For the first time in the history of the region, we were able to roll out public-private partnership, giving a legal cover to the investors. Previously, there was no legal framework for the investors,” he said while sharing how his government was providing a conducive business environment in G-B.

“Any investor who now comes to G-B, the government provides them with full protection and maximum facilitation while ensuring their investment is safe.”

This made a possible injection of around PKR 1 billion into hydroelectric projects by the private sector, Mr Abbas informed, adding that the dealing recently entered the final phase and an agreement is being finalised.

Like in every developing country, he maintained, it is the private investment which contributes to economic development.

“It is also for the first time in our history that we are receiving funding for Run-of-the-river hydropower through Private-Public Partnership (PPP, 3P, or P3) – this will enable us to generate electricity around the year,” he further said. 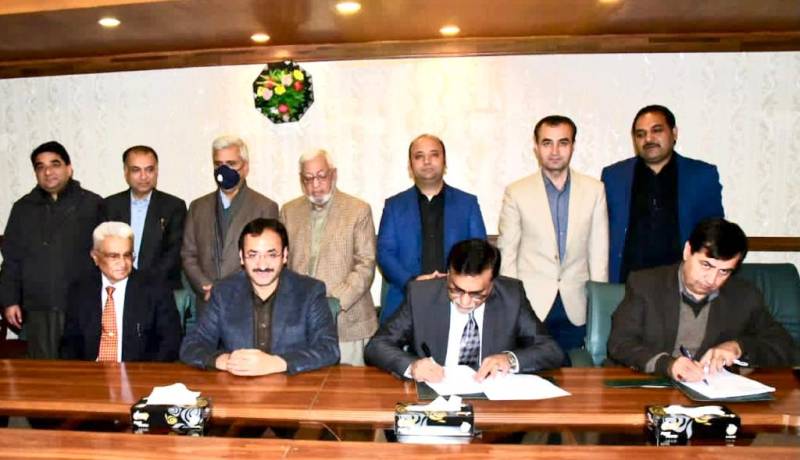 In a historic move this year, the G-B government signed first public-private partnership agreement with Industrial Promotion Services Asia to invest in the run-of-the-river power project.

The existing hydropower projects in the region offer only 10% efficiency, and while the Diamer-Basha dam will change the destiny of this region, the new projects under PPP will enable Pakistan not only meet its needs but also to export energy to the neighbouring countries.

Pakistan currently produces electricity for a cost of Rs 14-22 per unit, according to an estimate, while after completion of different hydropower projects in the region, the country will be able to bring it down to Rs 2.5-3. 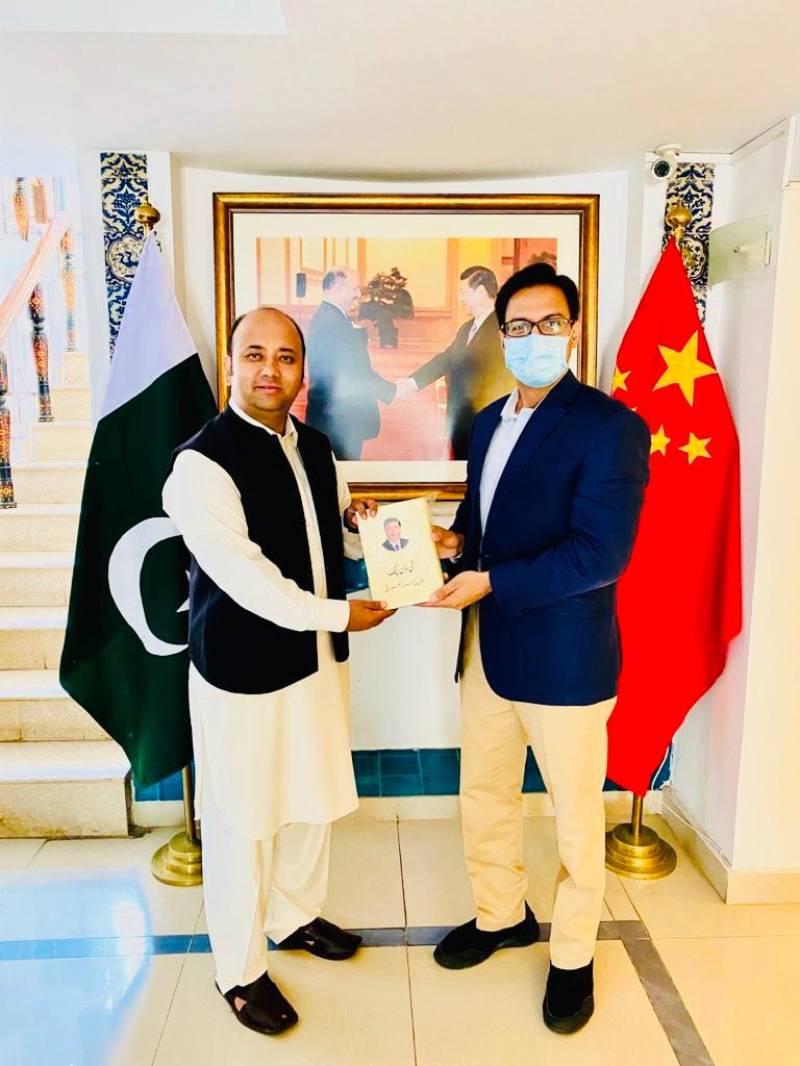 About the trillion-dollar gemstone deposits in the region, Waqar Abbas hoped G-B will be one of the future financial hubs of Pakistan once we secure investment for exploring the mines and minerals.

He also mentioned of a state-of-the-art Software Technology Park, an initiative of the Special Communication Organisation (SCO), inaugurated in Gilgit last month.

“Soon, there will be massive online opportunities for the locals as we are going to introduce Fiber-to-the-Home connectivity for everyone in the region.”

The finance adviser is also credited for the approval of an SME focused impact fund dedicated to investment in small and medium-sized enterprises (SMEs) in the G-B region.

It was also Mr. Abbas, who got the approval of G-B Science and Tech department from the federal government.

Roughly within four months in the office, the man also successfully secured the approval of restructuring the regional Board of Investment that plays a key role in ensuring safe investment. 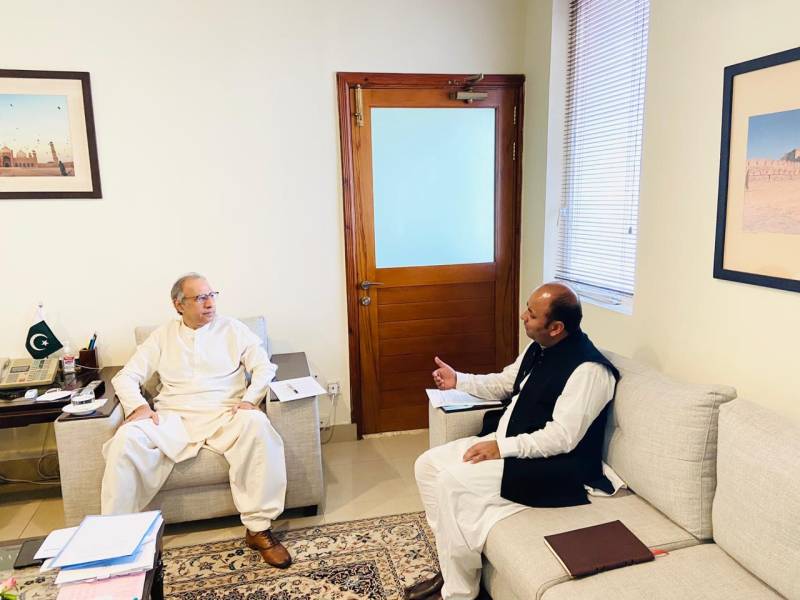 About tourism, which remains the major source of income for the people of Gilgit-Baltistan, Waqar Abbas said they have rolled out a few proposals to open China-Khunjerab pass for more visitors.

Gilgit-Baltistan is home to more than 20 peaks of over 6,100 metres (20,000 ft), including K-2 the second-highest mountain on Earth. Other peaks include Masherbrum (also known as K1), Broad Peak, Hidden Peak, Gasherbrum II, Gasherbrum IV, and Chogolisa, situated in Khaplu Valley.

He recalled Zulfiqar Bokhari, special assistant to Prime Minister Imran Khan, promising a comprehensive tourism development package for the area after coming into the power in G-B. 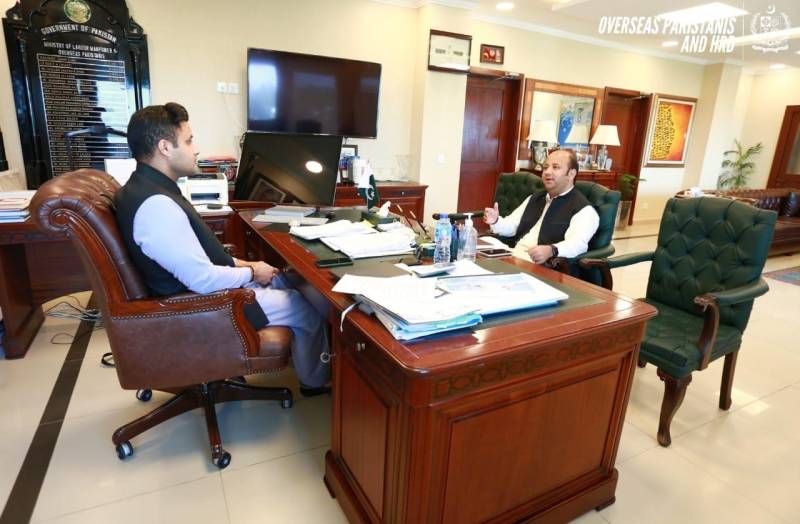 Under the package, ten recreational areas have been identified for setting up tourism zones in the GB. The tourism zones spanning over 100 kilometres area would be established in various localities including Hunza, Diamer, Ghizer, Shigar and Skardu with quality restaurants, tourism police and proper road infrastructure.

Moreover, the number of flights to and from the region has been increased, with two direct flights from Karachi to Skardu operating every week. “This saves at least 12 hours of a journey for the visitors travelling to the region.”

In addition, the Skardu airport is being upgraded on international standards and currently, three Airbus can land on the pad.

A new direct route from GB to Chitral is also being opened, in a bid to connect G-B with Khyber Pakhtunkhwa. Similarly, the under-construction Jaglot-Skardu expressway will reduce the six-hour drive to half besides opening the region to this part of the world. 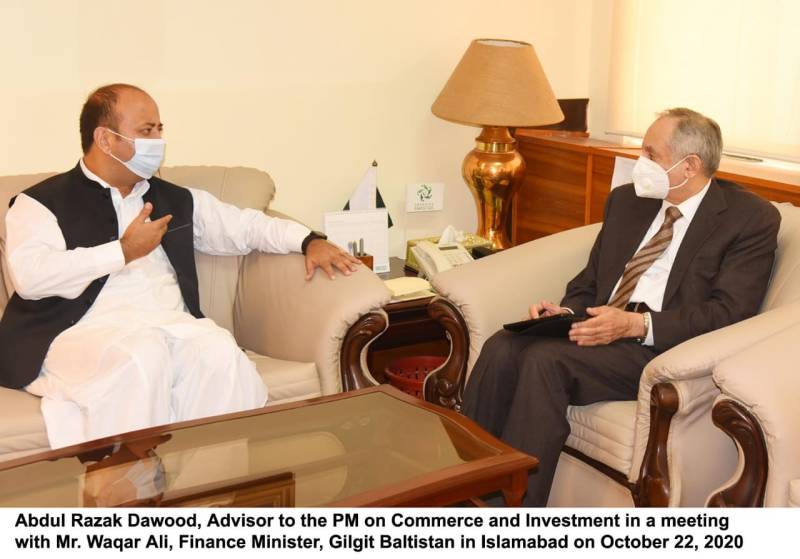 With the government of Pakistan taking a special interest in promoting tourism in G-B, the fears of a resurgence of COVID-19 cases and a complete lockdown looms as the second wave of coronavirus outbreak has begun in the country.

Gilgit-Baltistan was the first region in the country to be officially reopened under strict protocols on August 8, with various sectors, including tourism, after cases of Covid-19 had gone down considerably. The decision was primarily taken to revive the seasonal occupation of people directly and indirectly connected to the tourism industry — which employs just under one million people in KP.

Revealing the impacts of coronavirus pandemic on G-B’s economy, Waqar Abbas said people of the region saw the worst of times, with everybody returning to the region from all over the places and staying confined to their houses during the lockdown.

“There were no employment opportunities for the people of G-B, and everyone was sickly worried fearing dire implications for an already beleaguered healthcare system. But, fortunately, we saw quite a low number of infections and deaths and managed to revive the economic conditions soon as the lockdown was lifted with necessary restrictions.”

“In short, we are trying our best to keep everybody safe here.”

Besides that, Waqar Abbas was responsible for expediting the geological surveys for research on how the impacts of climate change can be reduced.

The Million Tree Tsunami programme of Pakistan Tehrik-e-Insaf (PTI) is also making a huge difference for sustainable growth in the region.

To another question, he revealed that it is for the first time that the military troops will not be deployed at polling stations during the voting.

“We are using civil resources only, and have called in GB Scouts, Rangers, Police, and other paramilitary forces personnel from all over the country for election duty,” he concluded.

In the end of the conversation, he assured of a smooth transition from one democratic government to the next by ensuring free and fair elections in G-B.

Waqar Abbas will leave the office by the end of this month.