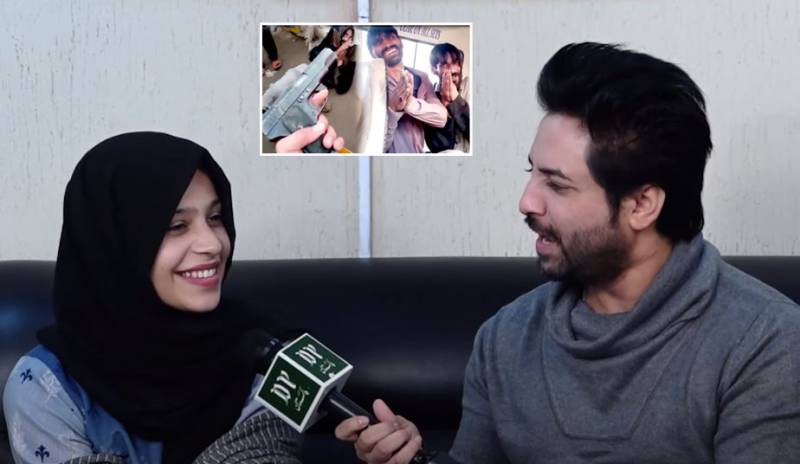 Bisma Shahid, a 19-year-old girl from Gujranwala, set a new example of bravery as she snatched the weapon from a robber during a mugging bid in her hometown last week.

The incident, which garnered attention of social media users, took place on Saturday when the brave girl confronted the muggers and shared this clip on social media.

In an exclusive interview with Daily Pakistan, the University of Gujrat student revealed how she foiled a robbery bid empty handed.

Recalling the day of the incident, Bisma said she was waiting for the university bus with her mother around 6:30 in the morning when two men covered in shawls attempted to deprive her of personal belongings, including her mobile phone.

As the two men tried to flee the scene with her belongings, she put up resistance and the muggers fell off their motorcycle. She then got her hands on the pistol and magazine of the pistol fell out during the scuffle.

Bisma was carrying wireless bluetooth earbuds and cosmetics in her bag, which the muggers attempted to take away. Bisma says she trusted Allah as she confronted the robbers. She advised women to carry something for their defence.

In the now viral clip, Bisma can be seen shouting and pointing the pistol at the muggers as they plead for forgiveness.

"Now, it's your time as you are the one who always shoot people!" she can be heard saying in the clip that is doing rounds on the internet.

Sitting in a police van, a rober can be heard pleading, "I have young children." Bisma responded, "Am I not the child of someone?"