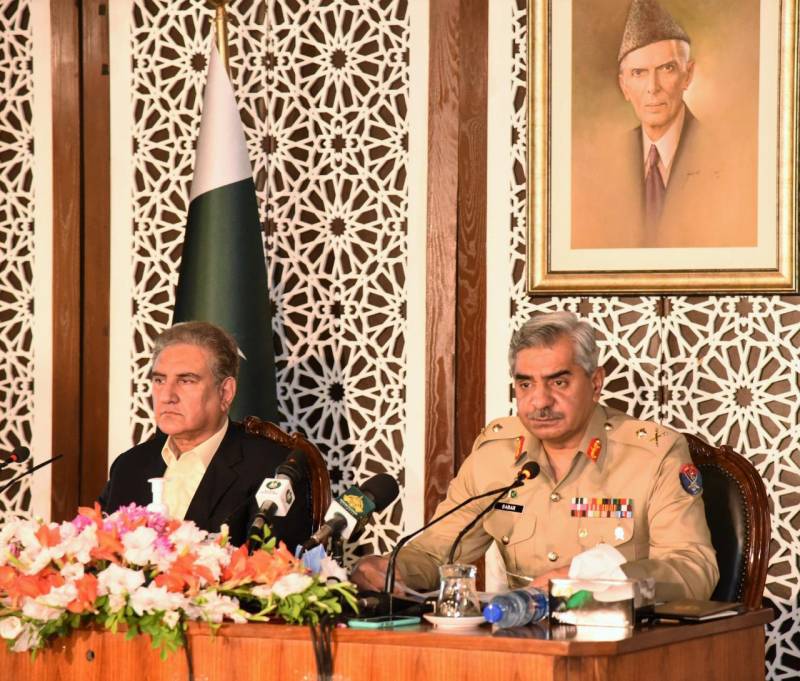 ISPR holds the mutual press conference with Pakistan’s top diplomat one day after the skirmishes between Pakistan and India at LoC. Causalities of Indian army troops were also reported by the Indian media. 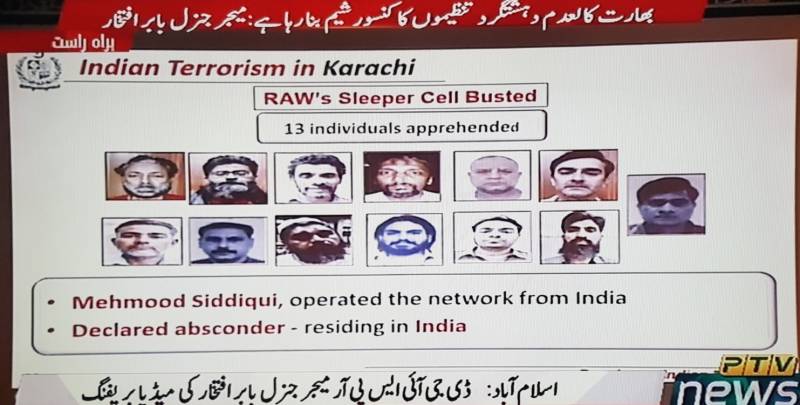 While speaking at the press conference, FM Qureshi said, Today we have irrefutable facts that we will present before the nation and international community through this dossier and I am presenting it today. Pakistan’s silence is not in the interest of regional peace anymore. India has planned to destabilize Pakistan and the true face of the world’s biggest democracy is unveiled.

Indian State Sponsorship of Terrorism by Sarfraz Ali on Scribd

"You are seeing that it’s their pattern that they are constantly carrying out ceasefire violations," said Qureshi. He added that the dossier has many details but some things are missing and will be used at the "time of need". India is continuously committing ceasefire violation along the Line of Control (LoC), revealing its fascist mindset. Pakistan condemns the ceasefire violations.

“Pakistan fought against terrorism and succeeded but India could not digest its success.”

Qureshi called the Indian state fascist, he said after the 9/11 attack, the world observes that Pakistan had become a frontline state and we paid a big price for it. From 2001 to 2020, at least 19,130 terror attacks were reported in Pakistan in which over 25,000 people were martyred, including 9,000 law enforcement agencies personnel and civilians.

“We even incurred financial losses worth $126 billion,” he remarked. “We can’t even talk about the lost economic opportunities because they can’t be calculated.”

Indicating the recent terror attacks he said in the last three to four months, you must’ve noticed that terrorist attacks are increasing in Pakistan, for example, the recent bombings in Quetta and Peshawar. FM indicates India’s grand design to destabilise Pakistan. 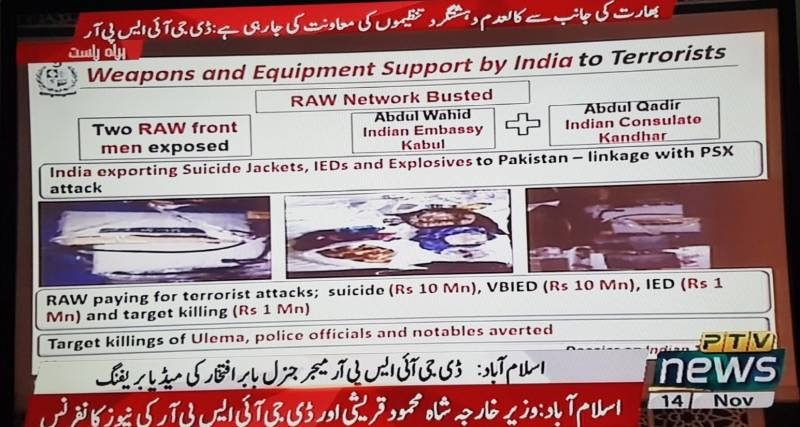 In the operations, these factors were flushed out of Pakistan but now they are being provided with weapons, IEDs, and ammunition. They have been instructed to target police officials, religious scholars, and other notables to start another sectarian warfare.

In the month of August this year, India tried to unify TTP, JuA, and Harkat-ul-Ansar (HuA). The Indian government is even trying to form a consortium between TTP, BLA, Balochistan Liberation Front (BLF), and Balochistan Republican Army (BRA). 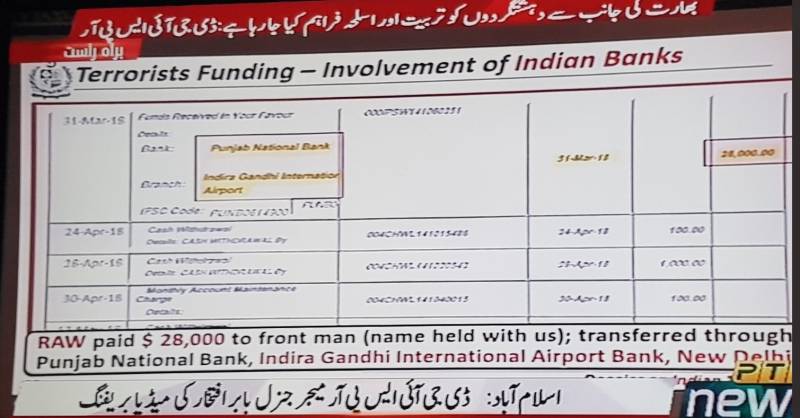 1. Being front-line state in the global war on terrorism, while Pakistan was making sacrifices in ‘blood and treasure', India was busy in stitching terrorist networks using her own soil and the spaces in our immediate neighbourhood and beyond.

2. Based upon incriminating evidences, we have compiled a comprehensive dossier, which uncovers Indian grand design of state sponsorship of terrorism in Pakistan to impede our trajectory towards peace, prosperity and economic recovery.

3. TTP and all its subsidiaries1 (JuA, HuA and LI) and various sub-nationalist entities 2(BLA, BLF BRA) are undeniable Indian proxies.

4. The evidences reflect that India has been financing, training, harboring and promoting Pakistan-centric terrorist entities for perpetuating terrorism and instigating instability in Pakistan.

5. Deliberate investigations have revealed that Indian Intelligence Agencies established connections with these organizations soon after they were flushed out from Pakistan as a result of a series of successful operations.

6. Corroborating evidences of terrorists funding trail reflect that during the past few years, India has invested more than PKR 22 Billion for nourishing these organizations.

7. Recent upsurge in violence in Pakistan is a direct consequence of Indian efforts to infuse new life into these banned outfits.

8. After supervising recent mergers of TTP with its breakaway factions, India is also endeavoring for the unification of various terrorist entities (TTP and Sub-nationalists) at one platform to synergize their efforts.

9. Indian patronage of sub-nationalists of Balochistan is designed to undermine, delay and disrupt CPEC.

10. Soon after the announcement of CPEC, India had established a dedicated CPEC call at RAW HQ 2015, to scuttle CPEC projects. The head of the cell directly reports to PM. The cell was initially allocated PKR 80 Billion for subversive operations.

Watch how RAW handler giving the video training to a miscreant for operating IEDs. Terrorism must be stopped for better future of Asian. #PakistanArmy pic.twitter.com/eRejtlSt6R

Army spokesperson while briefing on Indian state terrorism said the neighbour country is establishing a consortium of Tehreek e Taliban Pakistan with proscribed organisations of Balochistan united under the banner of Baloch Raaji Aajoie Sangar (BRAS) which was constituted in 2018.

Dossier shared by the Pakistani official’s states that an Indian intelligence officer named Colonel Rajesh, employed at the Indian Embassy in Afghanistan, is behind the master plan and a letter in Dari revealed that he held four meetings with terrorist commanders to upscale terrorist activities in main cities of Pakistan.

DG ISPR Iftikhar said the Indian agenda is to formulate Daesh e Pakistan and in recent events, 20 Indian militants were relocated from India to camps along the Pak-Afghan border. The Daesh Commander Sheikh Abdul Rahim aka Abdul Rehman Muslim Dost received the terrorists.

He further describes the Indian ambassadors in Afghanistan regularly directs terrorist activities. To make such arrangements in Pakistan territory RAW made two transactions to promote terrorism in KPK, both transactions were gone through banks in India. A sum of $28,000 was transferred through Punjab Bank India, and another amount of $55,851 was sent by an Indian national Manmeet via New Delhi to Afghanistan International Bank.

"A letter in Dari reflects that India paid $820,000 to TTP leadership through its collaborators," confirmed the DG ISPR.

The army spokesperson said India raised a militia of nearly 700 people to continue terrorism in Balochistan. "A commission comprising 24 members was created which included 10 RAW operatives. A sum of $60 million was dedicated for this force."

Sarfraz Merchant and Tariq Mir revealed confessed that Altaf Hussain Group (AHG) used to be funded by RAW through two Indian companies (JVGT and Paras Jewelry), adding that there was evidence of transactions worth $3.23 million.

India has been providing ammunition and weapons to AHG. A confession by Ajmal Pahari validated transfer of weapons 620,000. Pahari also confirmed India established four training camps for AHG militants in Dehradun and Haryana. "Training duration varied from 15 days to four months. It was confirmed that 40 terrorists received training."

Major general Iftikhar also confirmed that agencies are managing 87 terrorist camps. RAW sponsored network of six terrorists was linked to the recent attack on Pakistan Stock Exchange. It was also involved in the delivery of suicide jackets to "various terrorist groups operating in Pakistan".