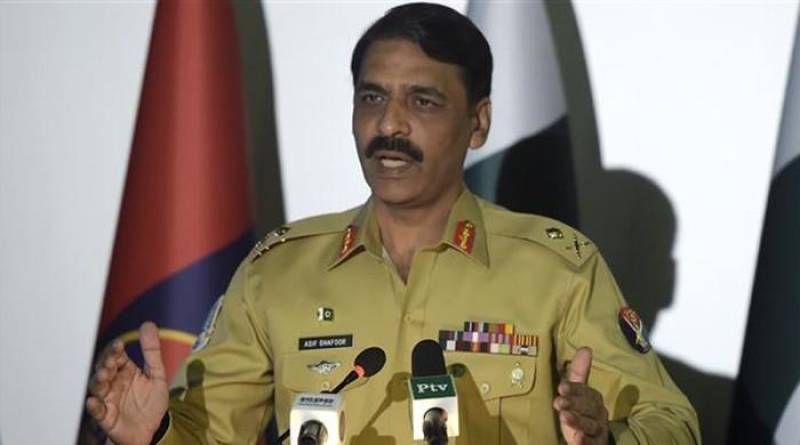 Addressing a pivotal press conference, the Pak Army official expressed that Army was not posing any threat to the democracy but hastened to add that democracy was threatened by not fulfilling its requirements.

The military official declared that he had to say this because there were a lot of rumours abut martial law and [the installation of a] technocratic government.

The ISPR head also responded to Ahsan Iqbal's criticism for commenting on the economic situation of the country expressing that being a soldier and citizen of Pakistan, he was disappointed on the statement of Interior Minister.

To a query Major General Asif Ghafoor said, “I stick to my words, however in my beeper to private TV I did not say Pakistan’s economy is unstable.”

Ghafoor continued that the Pakistan Army was a state institution and it was very important to sit and talk about things.

"If we need to improve the economy, we will have to bring certain changes and the China Pakistan Economic Corridor needs to be supported [holistically] he said."

Detailing about the address of Chief of Army Staff Qamar Javed Bajwa, the ISPR spokesperson said that he told the traders in informal talk as well that everyone should play their role [for the country's economic betterment].

He stressed the need for tax recovery while presenting statistics of successive fiscal years.

"Last year, the taxes recovered were only 39pc, and from private sector the recovery was only 40pc. It is too meagre, the tax base needs to be increased," he concluded.

Major Ghafoor went a mile more and described that the appointments of chiefs is performed by the elected government and any operation be in Sindh or Punjab is sanctioned by the civilian government.

"When it comes to Pakistan, the security and survival of Pakistan, we all are one," he said. "Every Pakistani and every institution is one against them — the outside forces should know this."

Although the major chunk of Saturday's presser was consumed by issues from economy to civil-military balance even then the spokesperson detailed the nature of rescue operation that led to the recovery of Canadian-American family held captive by Taliban since 2012.

"That day at 4.10pm, we were informed by an American diplomat that the family is being transferred to Pakistan. On the information we received, we sent our troops, used surveillance means and detected the vehicles [being used to transport the hostages]."

"There was a driver and three armed people, there was also an Afghan refugee camp nearby," where Maj Gen Ghafoor said the kidnappers had fled to.

SUKKUR - Leader of Opposition in National Assembly Khurshid Shah has said there is nothing wrong with the army chief ...

Major Asif Ghafoor shared that the Pak-Army had done a lot more in the country during past few years and found great results claiming that there were no no-go areas in the country.

Returning to engagement with Donald Trump's America, the army's spokesperson said that initiatives had been taken and the US had responded.

"You have seen the results, and you also saw Trump's statement [praising Pakistan following the recovery of the abductees]," he said.

The 'blunt' spokesperson of Pak Army did not comment on whether there were any dialogues being conducted with the Taliban saying that 'the question was outside his domain'.

'Please contact the Foreign Office on talks with the Taliban and their [the Taliban] office in Doha' he responded.

Referring to the possibility of a joint operation with American troops on Pakistani soil, as proposed by Foreign Minister Khawaja Asif, the army spokesman was quick to dismiss its possibility, saying he was doing so on a technical point.

"In military terminology, a joint operation means forces of both countries conduct an operation. There is no question of it. Full stop," he said.

It is relevant to mention that on Friday, Ahsan Iqbal said "Pakistan’s economy is stable and is doing a lot better than it was in 2013". He also asserted that the country’s economy is not army’s business.

Earlier, Maj Gen Asif Ghafoor had said in an interview “if the economy is not bad, it is not doing so well either.”

Prior to that, Chief of Army Staff Qamar Jawed Bajwa, while addressing economists and businessmen during a seminar in Karachi, had said the country’s economy was showing mixed indicators and that the tax base needed to be expanded and economic policies continued to be able to break the “begging bowl”.