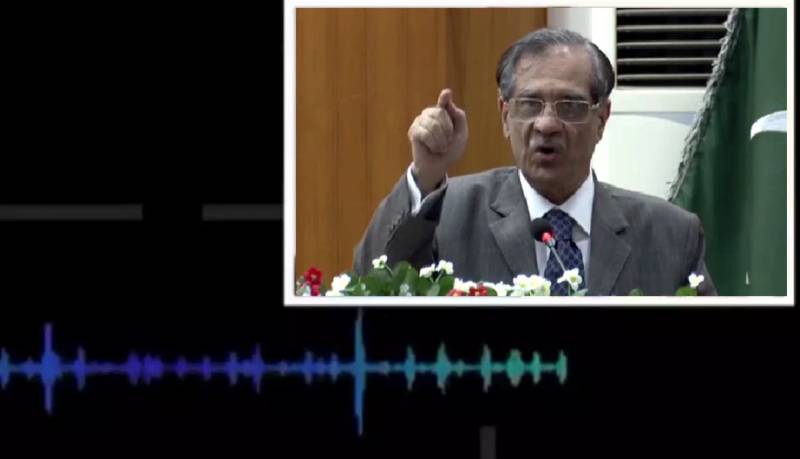 ISLAMABAD – In another twist in the case of a leaked audio clip of Saqib Nisar, a foreign forensic firm has confirmed that the audio leak of former Chief Justice of Pakistan (CJP) Saqib Nisar was ‘edited’ as the viral clip was made up of multiple audio files.

Reports in local media said a private news channel approached US-based forensic audit Primeau Forensics for the forensic analysis of the audio leak in which he can be heard saying “Let me be a little blunt about it. Unfortunately, here it is the institutions that dictate judgements. In this case, we will have to punish Mian sahib. [I] have been told 'we have to bring Khan sahab [into power]”.

The forensic company said there are two reverberances in the voice as the person could be heard speaking from a distance before 25-second as compared to the other 20 seconds in which the vocals were captured from a close range of the mike.

The report said the audio released by a reporter of a leading news outlet was comprised of two clips that were recorded in a ‘different environment’.

Meanwhile, PM’s aide on Accountability Shahzad Akbar commended the investigative journalism of the news channel which reportedly paid 1 million for the audit.

Shahzad, while lambasting at PML-N, said it's their botched attempt to take advantage of Calibri font, audio leak, and affidavit of former Chief Justice of Gilgit-Baltistan Rana Shamim.  He also mentioned inquiring the reporter about the audio clip.

Meanwhile, the reporter who came with a shocking clip termed the forensic analysis as ‘propaganda’. Taking it to Twitter, he said no one ever tried to contact him to get the audio clip he had with him.

He said that the news channels that had refuted his news story in the first place are continuing to do it.

Propaganda in Pakistan continues. My story on Saqib Nisar audio was based on a forensic analysis conducted by a credible US firm. The forensic firm was threatened by thousands of people from Pakistan to change the report but they always confirmed that they worked with Fact Focus.

The investigative journalist also hinted at legal proceedings against the Pakistani news channels for spreading lies if they run a news story against him or his story.