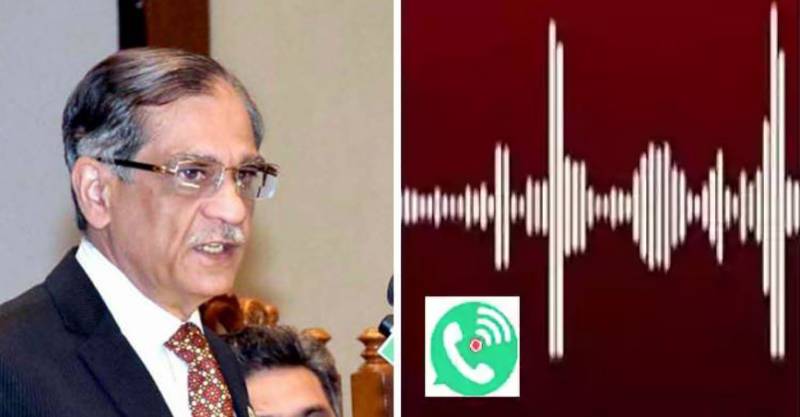 ISLAMABAD – A US forensic firm, which examined the alleged audio clip of former Chief Justice of Pakistan Saqib Nisar, was “confident of the integrity of the audio file”.

The website, which published the story, carried a statement, saying that it got the audio file checked by a United States-based firm. It also mentioned the firm’s analysis report of Garret Discovery maintains the integrity of the audio leak and also added that the “clip has not been edited in any way”.

US firm representative speaking with a leading daily confirmed to work for Pakistani site that published the controversial story. “We have a confidentiality clause that prohibits us from speaking about the scope of work or work we performed,” the firm representative told a media outlet.

It also refused to share in-depth details saying that they don’t have any problem releasing results as long as their client signs an agreement allowing them to do so.

The journalist of a private news channel, who leaked the audio clip, also took to the social site where he said he released the forensic report of audio by a credible organization and every word said by any person can be found out in one’s previous speeches.

He further mentioned that the only way to oppose is to prove it wrong with a forensic report.

The scandal of former Supreme Court judges has sparked an intense debate among the political circles with the opposition demanding a detailed probe.

Meanwhile, the treasury benches opposed and termed it as a conspiracy against the judicial members. Federal Information Minister Fawad Chaudhry said the opponents started the campaign against the judiciary without doing proper homework.

Chaudhry said the clip, indicated that the audio in the viral video must have been taken from the older video files.

The recent development comes after an audio clip allegedly featuring former CJP was leaked in which a person could be heard saying that “former PM Nawaz Sharif and his daughter Maryam Nawaz would have to be punished to make space for Imran Khan in politics.”

Meanwhile, former Chief Justice rejected the authenticity of the clip, terming it ‘fabricated’. The audio clip is being falsely associated with me, he said while speaking with a local news outlet.

Nisar also mentioned that “IHC is currently hearing a proceeding regarding alleged clip and it should take notice of the recently leaked scandal under penal laws”.

He further added that his “credentials were damaged through the purported scandal and he is consulting his lawyers to deal with it in a legal manner”.

The recent clip is the second such controversy involving Saqib Nisar within just over a week as earlier, former Gilgit Baltistan judge Rana Shamim, claimed that former CJP had asked a high court judge to keep Nawaz Sharif and his daughter in jail till the 2018 general polls.