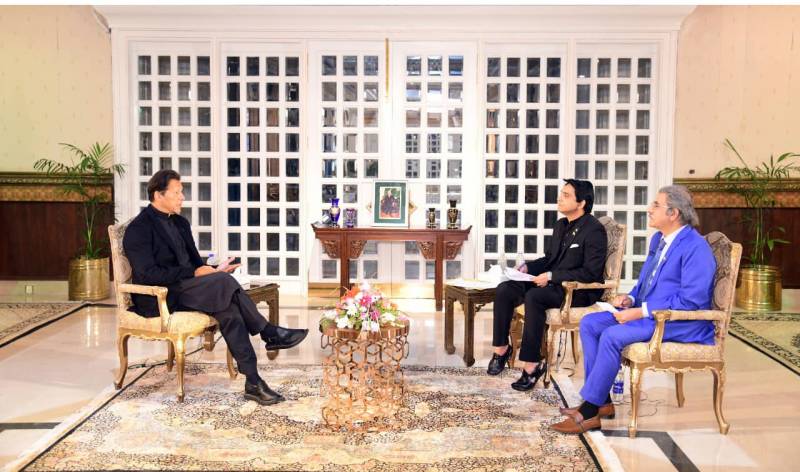 LAHORE – Prime Minister Imran Khan during an interview with Bol News said that family politics and governments under military control have caused huge loss to Pakistan.

Shedding light on the past governments, he said that 'I am the only Pakistani politician who was not nurtured at the General Headquarters.' Khan also named PPP's founder and former Prime Minister, Zulfiqar Ali Bhutto, who was a part of a military dictator's cabinet for eight years before coming into power.

Imran Khan bashed opposition parties by saying that everyone was 'pro-military' once but now they pretend to be ‘democrats’.

Speaking about the current political situation, the premier said that family politics prevail in Pakistan, as the next generation of corrupt leaders takes over the reins after their parents.

Lambasting at PDM, he said that JUI-F president Fazl is the biggest corrupt politician of Pakistan. Calling him Maulana is a disgrace, he added.

While answering a question he said the opposition tried to blackmail him, and asked for the NRO to continue his governance. PDM proposed 34 amendments in NAB so that they can be spared from their corruption cases.

"Broadsheet and Panama are proof of how Zardari and Nawaz looted the country and transfer their ill-gotten wealth through money laundering," he maintained.

Imran Khan said that the 2013 election was 'rigged' by everyone including the chief justice, and the election commission was involved.

Khan termed the era of 2008 to 2018 as a decade of darkness. He added that Pakistan has struggled for democracy, "the country is in a dark period in the previous reigns, in which every institution was weakened."

During the interview, the Prime Minister also demanded the Election Commission Of Pakistan (ECP) to make public the inquiry of foreign funding.

On asking if his children will lead PTI in the future, to which the premier replied, "unfortunately, my children do not live in Pakistan."

He also responded to why his spokesperson Nadeem Afzal Chan had resigned; he said, "Chan must have his reasons to do so. I, on the other hand, did not ask anyone to resign. If anyone has an issue with the cabinet's decision, then they should resign, just like it happens in democracies."