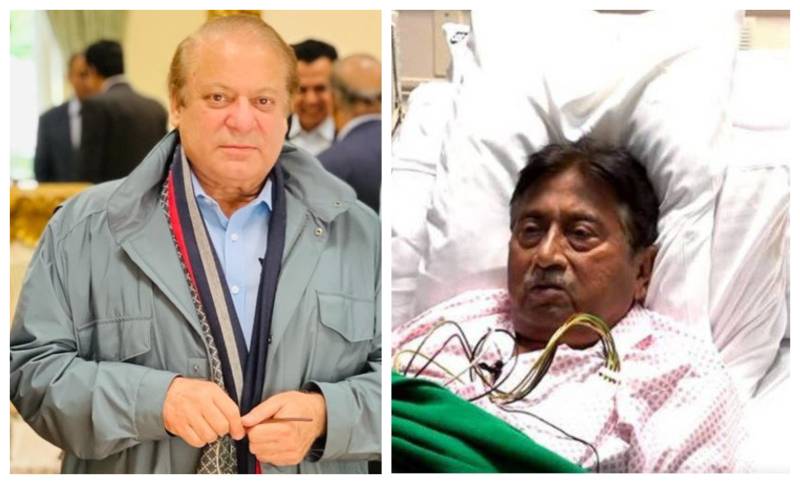 LONDON – Former three-time prime minister Nawaz Sharif, who was ousted in 1999 military coup by then Chief of Army Staff (COAS) General Pervez Musharraf, has called for facilitating the return of ailing former military ruler to Pakistan.

The supreme leader of PML-N faced imprisonment and a decade-long exile following his ouster in 1999 and she came into power in 2013 when a treason trial against Musharraf was initiated.

The former military ruler went to Dubai in 2016 for his medical treatment after his name was removed from ECL. In 2019, a court awarded death sentence to him in absentia for his decision to impose emergency in the country in 2007. However, the ruling was later declared null and void.

Last week, Musharraf's family announced in a Twitter post that he was in critical medical condition and currently receiving treatment at a Dubai hospital.

Nawaz Sharif in a statement said that he had not a personal enmity or grudge against Pervez Musharraf.

“I do not want anyone to suffer the sorrows I had to suffer about my loved ones," he said and prayed for the recovery of Musharraf.

He also urged the Prime Minister Shehbaz Sharif-led government to facilitate the former army chief if he wants to return to Pakistan.

Speaking to a TV channel on Tuesday, the chief military spokesperson said that family of the former president had been approached and the final decision on his return would be made by his family and doctors.

"General Pervez Musharraf's health is very bad. In such a situation, the leadership of the institution is of the view that he should be brought back to Pakistan. But this decision will be made by his family and doctors," the ISPR DG said.

He added that arrangements for his return would be made after his family’s response.

Defence Minister Khawaja Asif said last week there should be no obstacle in former president Musharraf's return to Pakistan in view of his illness.

DUBAI – Former chief of army staff Pervez Musharraf has been hospitalised for the last three weeks due to a ...