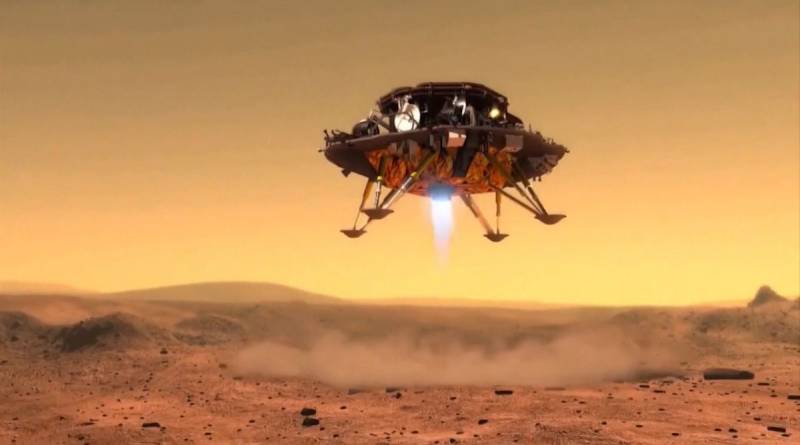 BEIJING – After several months orbiting the red planet, a Chinese rover has successfully landed on the Martian surface Friday, making China the second country after the United States, to leave its footprint on Mars.

According to a report of a Chinese state news agency, the six-wheeled Zhurong robot was touched down at Utopia Planitia - a vast terrain in the northern hemisphere of Mars. The landing module separated from the orbiter three hours later and entered the ‘Red planet’. The landing process consisted of ‘nine minutes of terror’ as the module decelerates and then slowly descends.

The unscrewed vehicle used a combination of a protective capsule, a parachute, and a rocket platform to make the descent.

Chinese President Xi Jinping felicitated the people of China for getting success in the rare mission. A statement issued from Jinping said ‘You were brave enough for the challenge, pursued excellence, and placed our country in the advanced ranks of planetary exploration.’

‘Your outstanding achievement will forever be etched in the memories of the motherland and the people’, it further added.

Reports of International media suggested that the rover will now survey the landing site before departing from its platform to conduct inspections. The Zhurong comprised six scientific instruments including a high-resolution topography camera. It will examine the surface soil and atmosphere while looking for signs of ancient life using ground-penetrating radar.

The first successful landing ever was made by NASA's Viking 1 in July 1976 and then by Viking 2 in September that year. The former Soviet Union also attempted in December 1971, but communication was lost seconds after landing.

WASHINGTON – Perseverance rover on Thursday landed on the surface of Mars after successfully overcoming a risky ...

Earlier in February this year, Nasa’s Mars rover Perseverance, the most advanced astrobiology lab ever sent to another planet, streaked through the Martian atmosphere and landed safely inside a vast crater, the first stop on a search for traces of ancient microbial life on the Red Planet.