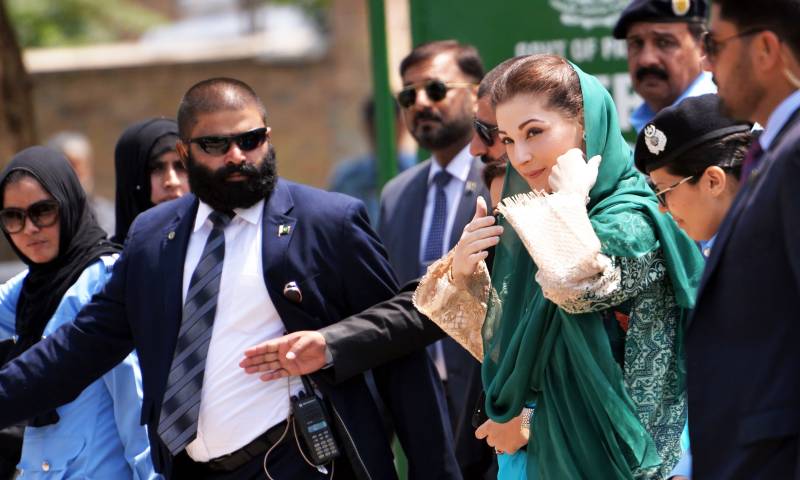 Generally, the legal facts and evidence become a casualty in the high-profile litigations involving mainstream politicians. It is truer when it comes to Pakistan, a country where the legal facts first have to battle with an offensive propaganda unleashed through private media houses which build up one-sided narratives either under cover of democratizing the society or safeguarding the country’s geostrategic interests.

The case in focus is the consistent propaganda line of ruling party against the Supreme Court over its three verdicts in Panama Paper scandal which led to the ouster of Nawaz Sharif and his and his children’s trial on serious money laundering charges.

The propaganda campaign by the ruling party over alleged “judiciary-army nexus for conspiring”  to bring about Nawaz Sharif’s ouster from corridors of power is precipitating fallouts onto the ruling party which stands dented from within its ranks and files. The Supreme Court’s third verdict in the review petition in Panama Paper scandal has provided more ammunition to the opposition parties to label “the entire Sharif family corrupt to the core”.

Here is how the Supreme Court came up with three verdicts, reaction patterns of the ruling party and more particularly the legal and political consequences of propaganda against the judiciary, for the House of Sharifs.

The Supreme Court handed down its first split verdict on April 20, this year.

Two judges in their judgments concluded that the expensive properties in London purchased through two Panama based off-shore companies Nielsen and Nescoll from 1993 to 1995, belong to Nawaz Sharif and hence they disqualified him. They found that these properties were ostensibly disproportionate to the declared and known sources of income of the ousted Prime Minister and therefore, they also ordered his trial on money laundering charges. However, the other three judges withheld their final verdict and noted with regret that the then premier was presiding over key civilian state institutions which are unwilling to independently probe money laundering charges against him and his family. Therefore, they were left with no option but to order further investigation by engaging the military-run two secret services to transparently and fairly probe and dig up more hard pieces of evidence before they handed down their final ruling.

The ruling party celebrated the order of three judges for more investigation into money laundering charges since it had averted for the time being an impending ouster of the then Prime Minister and head of the ruling party. Sitting Federal Minister Ahsan Iqbal the then went to the extent of saying that the court order for more investigation represented the will of the majority of people who supported his party while two judges verdict’s on disqualification reflected on how little support the opposition parties enjoy among people.

The second judgment was announced on July 28 this year. Three judges whose verdict hold the ground, only relied upon an “ admission”  of crime before the apex court by counsel of the former Prime Minister to disqualify him. Nawaz Sharif in his confession concealed his employment with Dubai based FZE company and his six years long “ unwithdrawn salaries” on the basis of which the Supreme Court sent him packing home. 1976’s Representation of People Act treats concealment of assets by public office holder as "Corrupt Practices."  Under the law, being a public office holder, Nawaz Sharif was bound to declare his assets in 2013 when he contested parliamentary elections as a result of which he was elected Prime Minister.

The three judges relied upon abundantly triable shreds of evidence retrieved from official archives, fresh proofs gleaned by the Joint Investigation Team, the top court had set up in April this year, to also order his and his children’s trial on money laundering charges.

Propaganda Line on the second verdict

The ruling party challenged the credibility of the Supreme Court following the disqualification of Nawaz Sharif as Prime Minister. Sharif family unleased fierce propaganda as if the Supreme Court ousted Nawaz Sharif merely on the basis of possessing an undisclosed work permit for being an employee of his son's company in Dubai after finding no other plausible evidence of corruption against him and his family.

The Supreme Court released its third detailed verdict in the same case on November 7.

The legal facts earlier overshadowed in the conspiracy theories floated by the ruling party over the course of months, have now started becoming a glaring stark reality.

“We could not have shut our eyes when an asset of the petitioner arising out of IQAMA (work permit) having surfaced during the investigation of the case and admitted by him to be his in no uncertain terms, was not found to have been disclosed in his nomination papers in terms of Section 12(2)(f) of ROPA. Nor could have we let him get away with it simply because he happened to be the Prime Minister of the country. Much higher level of integrity is expected of the rulers”, he observed.

Here is how the detailed verdict also revealed the evidence against former Prime Minister and his children:

“To our dismay and disappointment, the petitioner (Nawaz Sharif) has not been fair and forthright in answering any of the queries made during the course of hearing. He never came forth with the whole truth. He tried to fool the people inside and outside the Parliament. He even tried to fool the Court without realizing that “you can fool all the people for some of the time, some of the people all the time but you cannot fool all the people all the time”. Refuge in evasive, equivocal and non-committal reply does not help always. If fortune has throned, crowned and sceptered him to rule the country, his conduct should be above board and impeccable”.

Propaganda Line on the third verdict

The former Prime Minister in his reaction said the judges have spewed pent-up anger against him in the detailed verdict in review petition he and his children had filed against the second verdict. The ruling party, however, has been reluctant to come up with legal arguments on the merit of pieces of evidence. Their focus has always been to seek refuge in technical and legal points to sidestep the debate about the solid proofs of their involvement in money laundering with which they set up properties and mills abroad.

Adverse legal implications of the third verdict against Maryam Nawaz

The detailed judgment in the reviewed petition appears to be a response to months-long propaganda in which the process seems to have sealed the political fate of Maryam Nawaz for whom the former premier harbours desire to become next Prime Minister if his party wins next general elections in 2018.

Here is the most lethal part of the judgment which carries adverse legal consequences for Maryam:

“Since the Prime Minister of the country is thought to be the ethos personified of the nation he represents at a national and international level, denying an asset established or defending a trust deed written in 2006 in a font becoming commercial in 2007 is below his dignity and decorum of the office he holds.”

Apart from hurting Nawaz Sharif politically and legally, the above declaration of the court has come down very hard on his two children Hussain Nawaz and Maryam Nawaz and his son-in-law Captain retired Muhammad Safar.

Brief background of the case

The entire defense line of ruling family during the Supreme Court proceeding has been that Muhammad Sharif, the late father of the ousted Prime Minister bequeathed almost his entire business of steel mills to Hussain Nawaz, the son Nawaz Sharif. Hussain claimed to have bought properties in London in 2006 in his own name with the money received through the sale of steel mills one after the other.

Hussain Nawaz was bound to provide the money trail with which factories were set up first by his grandfather in Dubai, then in Qatar and later in Jeddah. On the other hand, the Joint Investigation Team found the original document revealing that in fact ownership of London properties belong to Maryam Nawaz.

In their failed attempt to prove their innocence, both brother and sister created fake documents to show that Maryam was a mere trustee of the properties in London and the not the real owner and Hussain was the real owner. Her husband Captain retired Safdar was made eye-witness to this Trust Deed. The JIT, however, discovered that it was a fake document as the font used in creating this bogus trust deed was not even officially launched in 2006 by Microsoft, something the Supreme Court referred to in its detailed verdict in review petition of Sharif family. Therefore, there are likely to be legally hit by following article 62 and sub-clause of (f).

“A person shall not be qualified to be elected or chosen as a member of Majlis e Shoora (Parliament) unless he (she) is sagacious, righteous, non-profligate, honest and ameen, there being no declaration to the country by a court of law.

The Supreme Court in its judgment in 2010 declared 2007’s martial law of General Pervez Musharraf as illegal and extra-constitutional which cost the former military dictator to contest parliamentary elections in 2013. His nomination papers were rejected on the basis of this verdict.

Hence recent verdict of the top court may hurt Hussain, Maryam, and her husband if they file nomination papers in general elections in 2018.

Apart from the implications of detailed judgement in review petition in Panama Papers scandal, Nawaz Sharif is likely to be convicted along with his three children as under the National Accountability Ordinance and Law of Evidence, the burden of proof is on them to prove themselves innocent after Nawaz Sharif as Prime Minister had claimed in the Parliament to have possessed each and every piece of document to prove his and his children’s innocence over their alleged involvement in money laundering. So was the unsubstantiated claim of Hussain Nawaz to own proprieties in London. Therefore, they are unlikely to come up with hard pieces of evidence to prove their innocence in ongoing trials at Accountability Court since they do not have anything other than forged documents they created to defend themselves earlier during the proceeding of the Supreme Court.

Why anti-judiciary rhetoric is counter-productive

In the ensuing propaganda warfare, Nawaz Sharif and his daughter Maryam Nawaz made a mockery of the apex court for being biased and backed by the military establishment. However, the propaganda has its limits in this time and age particularly in high profile cases where each party is fully armed with all weapons of counter-propaganda. In such propaganda battle, the stakeholders who are equipped with legal facts have every chance to win the media warfare to influence the public opinion ahead of general elections in 2018.

Since the opposition parties are equipped with legal facts and invisibly are alleged to have been backed by the establishment, it has exceedingly become far more difficult to sustain a propaganda line which carries half-baked facts and flimsy technical legal grounds to defend cases carrying clear evidence of money laundering against Sharif family.

The ruling party is even losing the media warfare.  The rating of news channels projecting narrative of ruling family is on the decline among viewers. It is just a small indicator how allegations of corruption are perceived by people at large.