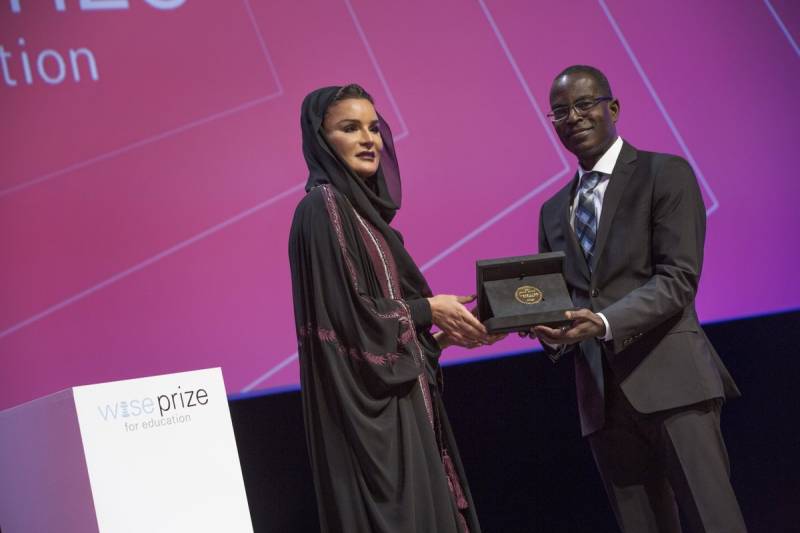 DOHA - Dr Patrick Awuah, a Ghana-based educationist, was awarded the 2017 WISE Prize for Education Laureate, which is likened to Nobel Prize in education, on Wednesday in Doha at the inauguration of the globally-attended 2017 WISE summit.

The Gahnian has a vision to bring about changes in society through creating an entrepreneurial mindset in society. His landmark project, Ashesi University College with 600 students, established as one of Ghana’s premier universities, has become an example of inculcating ethical leadership and entrepreneurship in African university graduates.

The WISE Prize, which aims to raise global awareness of the pivotal role of education in all societies was launched in 2011 at the initiative of Qatar Queen Sheikha Moza, and this year.

Also, some of the world's most creative leaders in the fields of education, technology, social entrepreneurship, global development, media and philanthropy convened in Doha to participate in this conference.

“I’m honoured to be the WISE Laureate,” said Dr Awuh.

The World Innovation Summit for Education (WISE) was established to place innovation in education at the forefront of the global agenda. Since its inception, the WISE Prize has been awarded to individuals whose education programmes reach the most marginalised communities.

DOHA - The eighth edition of the World Summit on Innovation in Education (WISE) commenced in Qatar's capital, Doha on ...

By the time, the batch passed the degree in 2005, all of them had job letters. Never looking back, the university maintained its job placement record because of what a UC Berkeley study finds “that local and multinational employers rate Ashesi and Ashesi Graduates #1 in Ghana in Quality of Curriculum, Career Preparation, Communication Skills, Maturity, Professional Skills and Ethics”.

A unique feature of the study of the university is students adopt ‘Examination Honor Code’. That is a sign of students empowerment. That is what universities are,” he told the gathering.

About the heavily politicized campuses of Pakistani universities, Dr Awuh says, “ Teachers should be empowered to take risks through research and putting the students to pursue the path to seek the truth.”

Earlier, Sheikha Moza in her speech said, "Education that drives progress, sooner or later, faces varying challenges at different levels; be it political, media-related, cultural or technological. The challenges worsened when political rhetoric employed exaggerated tactics and manipulations, and when media discourse shaped our lens of reality.

When the Internet revolution happened, it created a virtual world that deals with reality selectively, validating only its credibility. This jeopardized truth to a point that begs cross-examination."

She was critical of the media in shaping flawed and selective perception through agenda setting.

"It is a world where “objective facts are less influential in shaping public opinion than appeals to emotion and personal belief.” It is when truth is manufactured to take a different form to fit the image of those who want to reshape the world on fake news, fake images, fake truths and the pretence of representing the truth," she said.

Iraq was besieged for 13 years using tools of deception, and excuses were fabricated to justify the invasion in 2003. It was so strange that the invasion was dubbed as liberation. Instead of finding weapons of mass destruction, Iraq saw the massive destruction.

Iraq’s education system, one of the best in the region in 1990, was in complete ruins. A country that was on the verge of eradicating illiteracy, was caught in the midst of wars and conflicts that dragged progress back to the unfortunate conditions of the past.

"With those same tools, Yemen is besieged today, so that it may not know prosperity or stability. So that it drowns in a dreaded triangle of ignorance, disease and illiteracy," she said.

The social media users applauded the Ghana-based educationist for playing his part for the uplift of education in the financially-strapped region.

A number of Twitteratis lavished praise on Dr Patrick Awuh.

2017 #WISEPrize Laureate Dr. Patrick Awuah is a passionate advocate for empowerment and transformation through #education grounded in ethical leadership and community. #WISE17 https://t.co/gTCKs3Zk7M