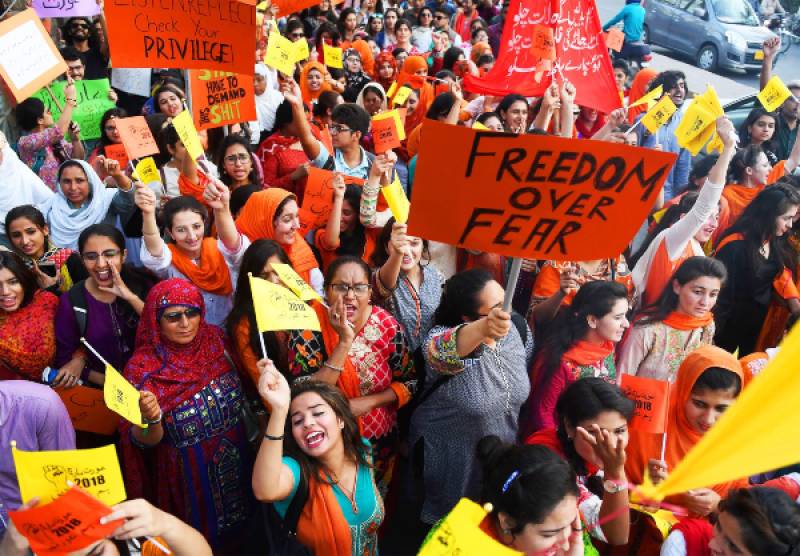 PESHAWAR – Police in Khyber Pahtunkhwa capital have booked the organisers and participants of Islamabad's Aurat March on the charge of committing blasphemy.

The case was registered after a local resident Ibrar Hussain Advocate approached a local court against the organisers and participants of the march held on March 8 this year.

Five Peshawar-based lawyers led by Hussain filed a petition with the court of additional district and sessions judge Syed Shaukat Ali Shah last month seeking the registration of a case against the organisers and participants of the Aurat March Islamabad.

The FIR has been registered under section 295 A and 295 C of Pakistan Penal Code (PPC).

The 295-A of Pakistan Penal Code is described ‘Deliberate and malicious acts intended to outrage religious feelings of any class by insulting its religion or religious beliefs:

Whoever, with deliberate and malicious intention of outraging the religious feelings of any class of the citizens of Pakistan, by words, either spoken or written, or by visible representations insults the religion or the religious beliefs of that class, shall be punished with imprisonment of either description for a term which may extend to ten years, or with fine, or with both’

By the same token the Section 295-C deals with ‘use of derogatory remarks, etc., in respect of the Holy Prophet (PBUH): Whoever by words, either spoken or written, or by visible representation or by any imputation, innuendo, or insinuation, directly or indirectly, defiles the sacred name of the Holy Prophet Muhammad (peace be upon him) shall be punished with death, or imprisonment for life, and shall also be liable to fine.’

Back in 2018, Pakistan's feminist movement was transformed into ‘Aurat March’ which became virtually equivalent to International Women’s Day. The March debates are never-ending in Pakistan where protesters demanding to curb the deeply-rooted patriarchy prevalent in the country is associated with scandal.

PESHAWAR – A local court on Friday ordered to register a First Information Report (FIR) against the organizers of ...