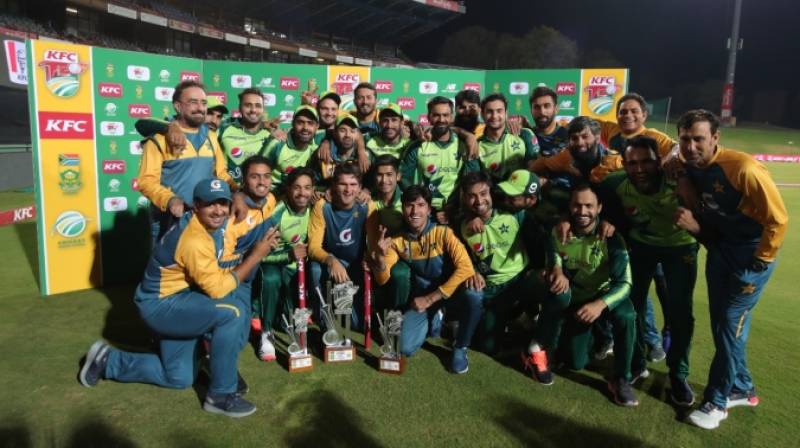 LAHORE – Pakistan Cricket Board has congratulated its men’s national cricket team on a successful tour of South Africa, where they won both the ODI and T20I series.

By virtue of winning the ODI series 2-1, Pakistan vaulted to second on the ICC Men’s Cricket World Cup Super League points table, while a 3-1 win in the T20Is has helped fourth-ranked Pakistan to reduce the gap with number-one ranked England to just 10 points.

English team holds 272 points, while India is at second position with 270 point, according to the ICC table.

During the South Africa tour, Babar Azam twice achieved number-one ODI ranking in a space of five days to eventually finish the series as the highest-ranked ODI batsman in the world, while Fakhar Zaman and Shaheen Shah Afridi climbed to their career-best rankings in the format.

In the third T20I, Babar scored his maiden T20I century and partnered in a 197-run first wicket stand with Mohammad Rizwan as Pakistan successfully accomplished their highest successful chase in T20Is by scoring 205 for one with 12 balls to spare.

In the fourth T20I, Pakistan overcame a middle-order collapse to win their first series in South Africa since March 2013 when they won the Centurion game by 95 runs after the Kingsmead match had been abandoned.

PCB Chairman Ehsan Mani: “On behalf of the Pakistan cricket fans, I want to congratulate the Pakistan men’s cricket team on an impressive performance on the tour. South Africa has never been easy for the visiting sides, but Pakistan stepped up every time they were tested and challenged on way to winning the ODI and T20I series 2-1 and 3-1, respectively.

Pakistan will depart for Zimbabwe on Saturday where they will play three T20Is on 21, 23 and 25 April, followed by two Tests, which will be played from 29 April to 3 May and 7-11 May.

With an impressive performance by Fakhar Zaman, Pakistan thrashed South Africa by three wickets in 4th and last T20I ...