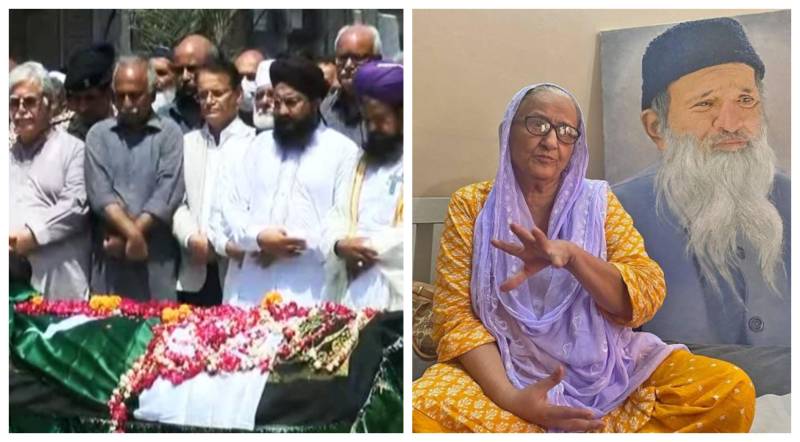 KARACHI – Bilquis Bano Edhi, the wife of late Pakistani humanitarian and philanthropist Abdul Sattar Edhi, was laid to rest at the Mewa Shah graveyard on Saturday.

Her funeral prayers were offered at the New Memon Masjid Kharadar after Zuhr prayer and attended by people from different walks of life, including Sindh Chief Minister Murad Ali Shah.

Faisal Edhi expressed deep grief over the demise of his mother, saying she encouraged him at the time of his father’s death.

“The death of my mother has left me alone,” he said, adding that she had been suffering from cardiac issues and other diseases since 2014.

Bilquis Edhi, a professional nurse, was heading the Bilquis Edhi Foundation after the demise of her husband in 2016.

She is survived by four children – Faisal, Kubra, Zeenat and Almas – from her marriage with Abdul Sattar Edhi.

Bilquis Edhi, 74, passes away in Karachi

Prime Minister Shahbaz Sharif has expressed deep grief and sorrow over the death of Bilquis Edhi and paid homage to her for her services to humanity.

The passing of Bilquis Edhi is a huge loss for the nation. An incredible woman in her own right, she stood by Edhi sb. like a rock & together they set up an example of human compassion & ran one of the largest philanthropic organisations of the world. May her soul rest in peace!

In his condolence message, the premier said that Bilquis Edhi continued the mission of late Abdul Sattar Edhi to serve humanity.

He prayed for her highest ranks in Jannah and patience to her family members.

"Sad to learn about the passing of Bilquis Edhi sahiba. She had always been shoulder to shoulder with Abdul Sattar Edhi in his philanthropic efforts and continued his work even after his death," said President Arif Alvi.

Sad to learn about the passing of Bilquis Edhi Sahiba. She had always been shoulder to shoulder with Abdul Sattar Edhi in his philanthropic efforts and continued his work even after his death. May Allah bless the departed soul.

CM Sindh visited the residence of Late Bilqees Edhi Sahiba to offer condolence with her family. #SindhGovt has declared tomorrow as a day of mourning to pay its respect to the contributions made by Bilqees Edhi Sahiba in the field of social service. May she rest in eternal peace pic.twitter.com/0rUJQ2wbZG

Celebrities from entertainment industry, sports and other fields also expressed sorrow over the demise of Bilquis Edhi.