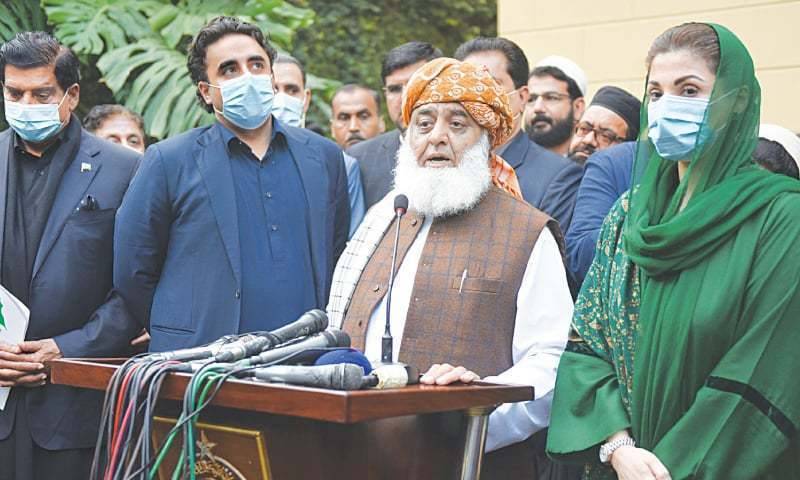 The decision to put off the long march was taken as the Pakistan Peoples Party, a key ally of the PDM, was reluctant to tender resignations from assemblies alongside the long march.

Fazlur Rehman while talking to media after hours long meeting with PDM leaders said that the matter of a long march alongside mass resignations was discussed today.

He revealed that PPP expressed their reservations over linking the resignations with the long march. He further said that the Bilalwa Bhutto Zardari’s party will inform its decision on resignation after holding a meeting of the Central Executive Committee.

"Until then, the long march must be considered postponed," the JUI-F said.

The PDM chief then abruptly quit the press conference without responding to the questions of reporters, leaving PML-N Vice President Maryam Nawaz and PPP's Yousaf Raza Gillani behind for explanation.

Maryam however shied away from commenting on the PPP’s stance, saying she did not want to create speculations.

When asked about PPP co-chairman Asif Ali Zardari’s remarks that the PPP will hand over resignationsl when former prime minister Nawaz Sharif will come back to Pakistan, she denied it.

The PML-N stalwart said that Zardari while addressing Nawaz Sharif said: “Mian sahab you must come back and so must everyone else for joint struggle."

Earlier in the day, it emerged that Asif Ali Zardari demanded Nawaz Sharif to come back to Pakistan in a bid to strengthen the Pakistan Democratic Movement (PDM).

The former president said that it was not the first time that the democratic forces faced such rigging in the elections.

Zardari said that he remained in jail for 14 years. He urged PML-N supremo Nawaz Sharif to return to the country at the earliest. He complained that PML-N Senator Ishaq Dar did not come to Pakistan to cast his vote in the Senate election.

Addressing Nawaz Sharif, Zardari said, “How can you fix public problems as you did not raise the salaries in your tenure as prime minister. I increased the salaries of government employees during my stay at the president office.”

“If Nawaz Sharif is ready for a war, he will have to come back to Pakistan. I will fight till my last breath because I have a different domicile. If we want to fight, we all have to go to jail. I have given powers to the parliament. Resigning from the assemblies will make Imran Khan and the establishment stronger. We should take all the decisions with consensus. The Pakistan People’s Party is a democratic party and we will fight while staying in the parliament.”