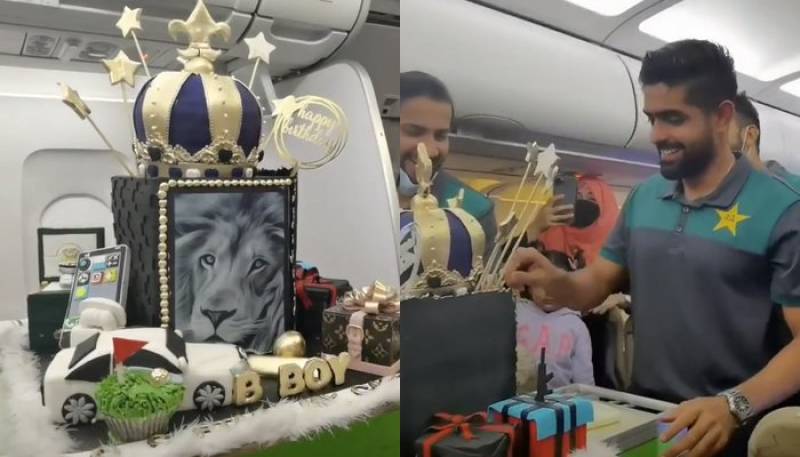 LAHORE – The Pakistan Cricket Board (PCB) arranged special birthday celebrations for skipper Babar Azam at the altitude of 36,000ft in the air, when the squad for en route to Dubai for the ICC Men's T20 World Cup.

A video shared by PCB on social media shows the Pakistan team celebrating the birthday on the plane with a much-decorated cake.

"Ladies and gentlemen, en route to Dubai, this is of immense [pleasure] to announce that, at the height of 36,000 feet, we are celebrating the birthday of the captain of the Pakistan team, Babar Azam," the air hostess made the announcement.

The world's number one ranked ODI batsman also received love and wishes on his 27th birthday from his fans.

Born on October 15, 1994 in Lahore, Babar Azam made a name for himself as a member of Pakistan's Under-19 cricket squad.

Soon, he became a household name in Pakistan when the right-handed batsman scored three consecutive ODI hundreds against the West Indies in the UAE in 2016.

As a whole, Babar Azam has so far played 179 international matches. He has made 8,551 runs across all formats of cricket with 20 centuries.

ISLAMABAD – Pakistan’s skipper Babar Azam on Sunday added another feather to his cap after becoming the ...