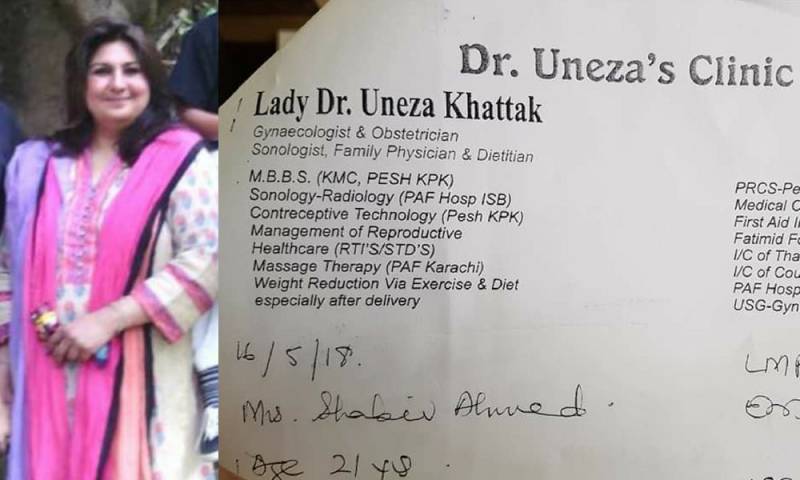 ISLAMABAD – In another shocking case of apparent medical negligence, a young couple had to lose their newborn baby in the federal capital of Pakistan last week.

The employer of Shabbir, a young Baloch migrant worker, took to Facebook to share his cook’s struggle as he took his wife to this doctor in question, who allegedly displayed revolting behavior, resulting in the death of the infant.

“Shabbir's wife (Sughra Ahmad) had been a paying patient of Dr Uneza Khattak, who claims to be an obstetrician/gynecologist, for three months. On 12th July, she began experiencing excruciating pain and came to see Dr Uneza, who sent Shabbir to get some medicine. When he returned, Dr Uneza had left, saying 'kuch kam kar ke ati hun' (I'll come back after doing some chores). She returned after SIX AND A HALF HOURS, and sent the couple home, recommending painkillers, saying Shabbir's wife wasn't in delivery position,” writes Sheryar Sheikh.

As the post adds, Shabbir's wife's pain became extreme, and he begged Dr Uneza to help in the early hours of 13th July. “He arrived at her clinic, and despite Dr Uneza living JUST 15 minutes away, she took almost 2 hours to arrive. In the meantime, Shabbir's wife gave birth on Dr Uneza's driveway,” the post read.

“When she did eventually arrive, Dr Uneza said 'AP NAY SAB KUCH GANDA KAR DIYA, PEHLAY SAF KAREIN' (You've made my driveway filthy, first clean it). She then did NOTHING TO HELP the 32 week premature baby boy,” Shabbir’s employer maintains.

The post continues quoting the medical practitioner as saying that “this baby will die soon anyway. Take him away”.

According to Shabbir’s employer, the doctor discarded the newborn baby outside in the boiling heat as he was struggling to breathe, naked, and had surgical instruments lying on top on him.

“She gave Shabbir no help and no advice on where to take the baby for 1 1/2 hours,” he added.

The baby was eventually taken to PIMS, which lacked an available incubator, then KRL, which refused admission because of lack of funds, but provided an ambulance. Eventually, more than three hours after birth, the baby was put in an incubator in Rawlpindi’s Benazir Hospital.

There, the child who lived for another 20 hours, before passing away.

Soon after Sheikh's post got viral, social media users expressed disgust and anger over the doctor's actions and offered their sympathies and support to the poor couple.

One of the users pointed out that Dr Khattak might actually not be a qualified gynecologist.

Shabbir’s employer has said they are yet to be called by the police to get a case registered against the doctor over medical negligence.

“I'm not denying that our failed private healthcare system played a major role in this baby's death. But please, do your part in destroying the culture of medical elitism and impunity in our society.

“Help us bring a privileged, cruel, and callous woman to justice. Help us get #JusticeforShabbir, his wife, and a baby who should have survived,” he appealed.

Social media users are also using hashtags - #JusticeforShabbir and #DrUnezaBabyKiller - to run a campaign against the doctor.