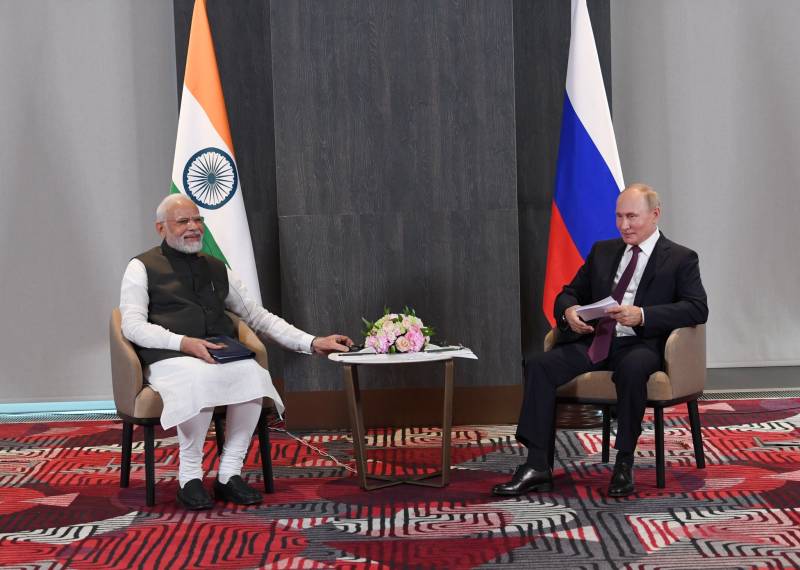 SAMARKAND – Indian Prime Minister Narendra Modi has urged Russian President Vladmir Putin to end the Ukraine conflict, saying that was not the time of war.

It is for the first time that Delhi has criticized Moscow publicly over military operation in the East European country as it has been stayed away from commenting on the war, which started around seven months ago.

"I know that today's era is not an era of war, and I have spoken to you on the phone about this," Modi told Putin in a meeting held on the sidelines of the Shanghai Cooperation Organization (SCO) in Uzbek capital city of Samarkand.

Stressing on the importance of “democracy, dialogue and diplomacy” the Indian premier called for an early resolution of the Ukraine conflict.

Reacting to Modi’s comments, Putin said that he was aware of India's concerns over the Ukraine conflict, assuring that Russia would do everything possible to bring it to an end.

“I know about your position on the conflict in Ukraine. I know about your concerns. I know that you share these concerns and we all want an end to all of these as soon as possible,” Putin said.

Meanwhile, Chinese President Xi Jinping did not talk about the Ukraine conflict in public, however, he urged Putin and other regional leaders to get united to foil plots of foreign powers.

"The world has entered a new period of turbulent change, we must grasp the trend of the times, strengthen solidarity and cooperation, and promote the construction of a closer community of destiny with the Shanghai Cooperation Organization," Xi said.

The two-day summit of SCO - which also includes Pakistan, Russia, Kazakhstan, Kyrgyzstan, Tajikistan and Uzbekistan – was held in Samarkand on September 15 and 16.

SAMARKAND -Iran has signed a Memorandum of Obligations to join the rapidly expanding Shanghai Cooperation Organisation ...