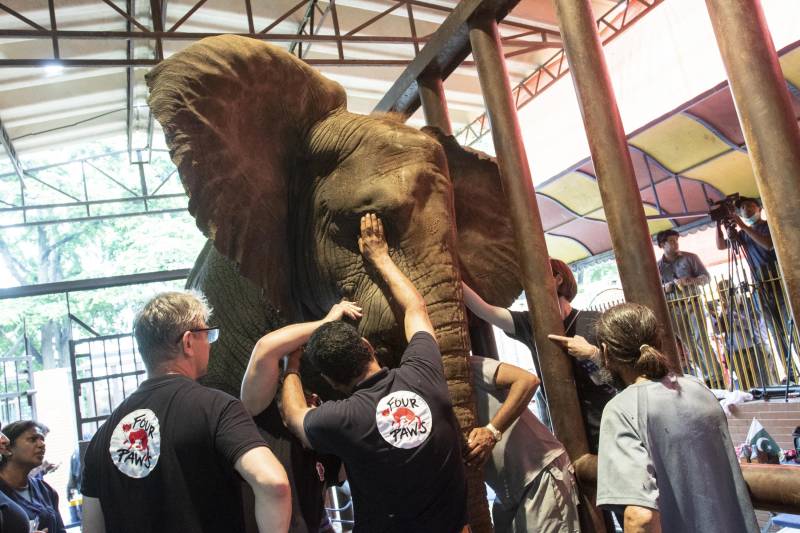 KARACHI – A team of international veterinarians has carried out a surgery to help one of Pakistan's four African elephants to get rid of toothache and infection.

A technique called standing sedation was used for the first time in the country's history to perform a root canal procedure on Pakistani elephant Madhubala at Karachi Zoo.

The Sindh High Court had granted permission to the head veterinarian at the Leibniz Institute for Zoo and Wildlife Research to visit Pakistan in September last year to evaluate the health of four African elephants in Karachi.

The decision was taken after animal rights activists went to court after a video went viral on social media showing cracks in the foot of one of the animals, Malika, who is housed at Karachi’s Safari Park.

Four Paws, a Vienna-based animal welfare organization, made its own assessment of the elephants’ health in November, suggesting immediate surgery since some of the animals had severe tusk infection.

“We are very glad the operation is done today on both sides of the tooth root of the elephant Madhubala. It is a special procedure, which we did,” Dr. Amir Khalil, director of Four PAWs, said after the procedure was concluded at Karachi Zoo.

Instead of a traditional approach, the Four Paws team used a less invasive, unique new technique that requires less complicated aftercare, given the conditions at the zoo. They used specially designed drills and endodontic burs along with other dental instruments.

#KarachiElephants: 1st operation was a success!
After more than 5 hours, our team on site is happy to report that this unique operation went well & elephant Madhubala is feeling fine! The tooth was 40cm long & rotten that’s why it was difficult to remove all the parts. #Pakistan pic.twitter.com/ku0LtgI6Xr

“Their tusks were broken, and the tissue inside the wounds was inflamed and infected,” Dr. Khalil said.

“They are in a lot of pain and without treatment the inflammation could expand and cause blindness or even brain damage and death. We put the elephants under ‘standing sedation’, removed the dead tissue, cleaned the root canal, and taught the local caretakers how to conduct regular post-treatment flushing and how to clean the wounds to prevent further inflammation. We expect good results for the elephants’ recovery. This is a very important step to improve their wellbeing.”

He hoped that the treatment would give Madhubala, 17, a new lease on life.

“She will be able to eat normally and not have this chronic and very severe pain which affected the quality of her life in the last few years,” he said.

The root is still inside but with flushing twice a day, we expect a good healing process from inside to out. We are very happy about the results and are excited for tomorrow's treatment of Noor Jehan 🐘. #Pakistan
📸 FOUR PAWS | Hristo Vladev pic.twitter.com/V1qLEiU9o1

Dr. Thomas Hildebrandt, a vet from the Leibniz Institute, who performed surgery along with Dr. Frank Göritzs, said standing sedation was a new approach.

“We think that it’s time to develop a new technique, standing sedation, and using a very specialized device which we developed over the last three months. We know exactly how the tusks look inside,” he said.

#KarachiElephants 🐘🇵🇰 There is no dental chair for elephants and the equipment needs to be custom-made by hand.🦷 Therefore, our team has been working for months organising & building the special tools. Tomorrow will be the big day of the 1st surgery. Stay tuned!📸Hristo Vladev pic.twitter.com/3J2T2biWhn

Dr. Khalil said he would recommend relocating Madhubala and Noor Jehan from the Zoo to Safari Park, where Malika and Suno reside.

“This place is not the optimum standard to keep elephants because there’s a smaller space. There is not enough shadow for the elephants, there is no enrichment,” he said, adding that elephants at the Safari Park were in a better condition.

“I think that [Safari Park] is a very nice example that in Pakistan, you can keep elephants in very good condition,” Dr. Hildebrandt added.