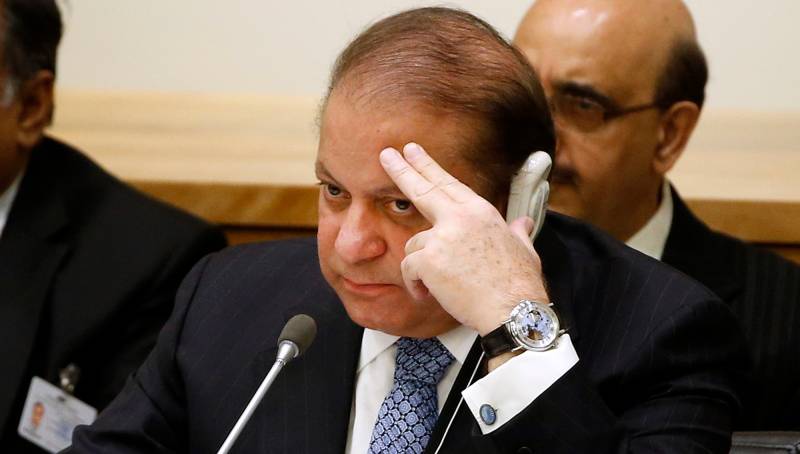 The collective moral values and ethos of a society usually reflect in every country’s legislative scheme. Under this moral principle, Pakistan’s Constitution in a broader perspective represents the collective ethos of the people and hence the Parliament is supposed to make laws to reflect the shades of the common values of the society. It is the moral authority which represents the will of the people through the Parliament while the legal authority is the only structure wrapped in moral legitimacy. Prime Minister, whosoever he may be, being an elected leader of the Lower House of the Parliament,  must reflect the collective moral values of the society in his conduct.

In third-world countries like Pakistan, whenever the elected governments lost their moral authority to govern, the military with no legitimacy either intervened behind the scenes to send them packing or directly staged coups against elected Prime Ministers.

The reason Pakistan suffered as a consequence of the frequent military takeovers is partially because of the fact that the dictators filled in the vacuum which the civilian leaders had left wide open, as they relied more on their legal authority and less on their moral authority which was driving their legitimacy.

From General Ayub, the first military dictator to the regime of General Pervez Musharraf, the military enjoyed public support in their initial years of rule. However, under international pressure when they tried to attain some semblance of legitimacy through fraudulent referendum and elections, they began to lose their moral legitimacy and ultimately they were ousted from the corridors of power very unceremoniously.  This vicious cycle has been going on since the inception of Pakistan. Rulers have been over-reliant on their legal authority which is like a grown tree with its branches spread all around, while the moral authority is like the root of the tree. When the tree is uprooted, it is obvious the tree would fall down.

Civilian leaders comparatively always had far less space to manipulate to shield their vested political and personal interests. Unlike dictators, they don’t have guns in their hands to push their agenda more aggressively on state institutions in crisis-like situations as is the case with incumbent Prime Minister Nawaz Sharif who is facing ouster from corridors of power on money laundering charges. Civilian leaders find themselves in trouble mostly because of their own misgovernance and corruption.

The pomp and show and official protocol they enjoy also lead them to mistakenly believe that they can cross the line to misuse their legal authority beyond the scope of moral legitimacy they get through elections.

Prime Minister Nawaz Sharif misused his legal authority by illegally influencing the state institutions including Federal Bureau of Revenue, (FBR) National Accountability Bureau, (NAB), Federal Investigative Agency (FIA), Security Exchange Commission of Pakistan and the State Bank, to frustrate any independent probe into Panama paper scandal which has exposed how the entire ruling Sharif family set up their chained network of offshore businesses in British Virgin Island, Britain, the Middle East and elsewhere in the world. The Supreme Court in its judgement of April 20, 2017, sounded frustrated about the manner with which Prime Minister’s government misused its legal authority on state institutions to make sure that no independent investigation is carried out against him and his family.

Therefore, the Supreme Court was left with no option but to set up a Joint Investigation Team (JIT) comprising officials from the military-run secret services such as Inter Service intelligence (ISI), the Military Intelligence (MI). Obviously, the Prime Minister had little option to influence the  MI and ISI. They seem to have used all available resources at their disposal to undertake an investigation which other state institutions under the thumb of Nawaz Sharif were virtually barred from doing.

The findings and evidence against the ruling family are solid, and now a matter of public record. The ruling family is largely pleading on technical grounds and not on the merit in the Supreme Court to reject a plethora of evidence which reflects how money was illegally transferred to overseas destinations to set up offshore companies and steel factories in a systematic manner. The money was then channelled back to Pakistan through legal means to fund political activities of the ruling party. This is a just the tip of the iceberg to understand the scale of hidden overseas assets the ruling family established over the course of decades.

An odd comparison of misusing of power

Prime Minister Nawaz Sharif has misused his authority in his current government relatively less than former President Asif Zardari who fronted Prime Minister Yousaf Raza Gillani before the Supreme Court to shield his own massive corruption. Gillani defied the top court orders to write an official letter to Swiss Government to reopen corruption cases against Zardari. In April 2012, he was sacrificed and got himself convicted of a contempt of court while shielding the corruption of Zardari whose scale of money-laundering is perhaps bigger than the current ruling family.

Nawaz Sharif may look like an angel if a comparison is made in terms of misuse of authority with General Pervez Musharraf, the military dictator who imposed his first martial law on October 12, 1999, and overthrew his elected government, an offence which the constitution treats as high treason punishable by death. In 2000 Musharraf suspected that the Supreme Court would declare his military coup extra-constitutional, though there was no hearing of any such case against him at the time. He declared the second martial law against the judiciary and brought in a fleet of obedient judges who took an oath of his personal allegiance instead of the Constitution of Pakistan. The judges under the command of his personal oath legalized his coups in 2000. Later he contested Presidential elections through a massively fraudulent referendum in 2003.  A parliament elected through rigged elections of 2002 provided constitutional cover to all extra-constitution steps of the dictator.

In 2007, Musharraf in his capacity as army chief contested Presidential elections. He feared that the top court - which had become largely independent at the time after the restoration of Iftikhar Muhammad Chaudhry as Chief Justice of Pakistan - may disqualify him. He had no legal authority to remove any judge after obtaining the constitutional cover for all of his previous illegal and extra constitutional measures from the Parliament.  Nonetheless, he declared a third martial law to remove all judges. Better sense prevailed after 2008’s general elections. Nawaz Sharif’s party played a key role to frustrate maneuvering by the People's Party to provide yet another constitutional cover to  General Musharraf’s third martial law. Instead, through the 18th amendment to the Constitution, the Parliament tore apart all previous constitutional and legal covers to General Musharraf’s martial laws.

The People’s Party government opted to let General Musharraf leave Pakistan after a formal guard of honour given the fact that  Zardari had underhand dealings with the then military dictator in return of withdrawing his corruption cases from the Swiss courts. When Nawaz Sharif returned to power after 14 years in 2013, General Musharraf was under house-arrest on the charges of kidnapping judges of the Supreme Court in 2007.

The 18th constitutional amendment on April 2010 had already rendered  Musharraf as a “ dismissed army chief and a usurper” by restoring October 12, 1999’s order of the then Prime Minister Nawaz Sharif to sack him.  Under this amendment, he was no longer a former President. Nonetheless, like Zardari’s government,  Nawaz Sharif continued to provide diplomatic facilities available to a former President through the country’s embassies abroad. This did not end here. The ruling party slowed down the prosecution against Musharraf involving the charges of masterminding the assassinations of former Balochistan governor Akbar Bughti and ex Prime Minister Benazir Bhutto. He gave in to the military and allowed the dictator to sneak out of the country in 2016, despite the fact that a high treason case which his government had boldly initiated was active in a trial court against him. The Prime Minister could not have withstood pressure from the military to spare its former chief given the fact that he has his own skeletons in his cupboard, some of which stand exposed after the JIT investigations.

The National Accountability Ordinance and the Law of the Evidence are least referred in the tirade by the ruling party. However, these do exist at the back of their minds. The reason the ruling party does not cite these laws in their propaganda warfare is because of the fact that the Prime Minister and his family have been caught red-handed. Many legal conclusions have been inferred on the basis of not only direct independently procured evidence but also based on circumstantial evidence and “legal assumptions” which have been protected in these laws.

Behind the scenes, the government suspects that the agenda of the military is to oust Prime Minister through JIT findings. What is wrong if it is done through legally procured evidence by the JIT? Prime Minister has no moral and legal authority to go in defiance mode in the event the Supreme Court ousts him on the basis of JIT findings.

Prime Minister is running out of legal options to defend himself in the Supreme Court.  The apex court is likely to refer the cases of Nawaz Sharif and his two sons to the accountability courts for their trials, which means it could take months before the trial court hands down a verdict on whether or not to convict them for 14 years imprisonment on money-laundering charges.The real trouble lies elsewhere and that is if Prime Minister doesn’t step down, the Supreme Court is likely to disqualify him for lying to a nation which means a life-long ban on him to contest elections and head his political party. He should resign to avert an instant ban on his political activities and prepare a strategy to contest the trial in the accountability courts and general elections in 2018. He is engaged in a gamble which he appears to be losing at the risk of a foreseeable split within the party if he is disqualified by the three member panel of the judges while two judges have already done so in April this year. He can't do much other than organizing few protests if he is disqualified. Therefore, his course of action should not be defiance of the court ruling, but clearheaded actions which have never been undertaken in the history of Pakistan.

Determining who is more corrupt: military generals or politicians

People fairly have a good idea how corrupt the politicians are. Partially the credit goes to the politicians themselves who consumed their lot of energies to expose one another with behind the scene help from the military establishment over the course of decades. Prime Minister Nawaz Sharif has already eroded his moral authority by delaying his resignation after damning findings against him. However, he still has a chance to strike back.  Before he is possibly ousted by the court, his government should set up a fact-finding Joint Investigating team. He may choose officials on his own or let the parliament do so. The job of the investigators should be to ascertain circumstances which led to slow down all prosecution cases against General Musharraf and also investigate overseas properties and assets of all leading politicians and military generals - both retired or serving if any. The mega probe surely should not be confined to only Musharraf whose overseas assets and bank transactions are known secrets. On the basis of his government’s information, he should name all military generals and top politicians  involved in accumulating assets beyond their means. This is high time to act to hold across the board accountability, otherwise Mr Prime Minister you may go down in the history with the stigma of a “ liar and corrupt”.