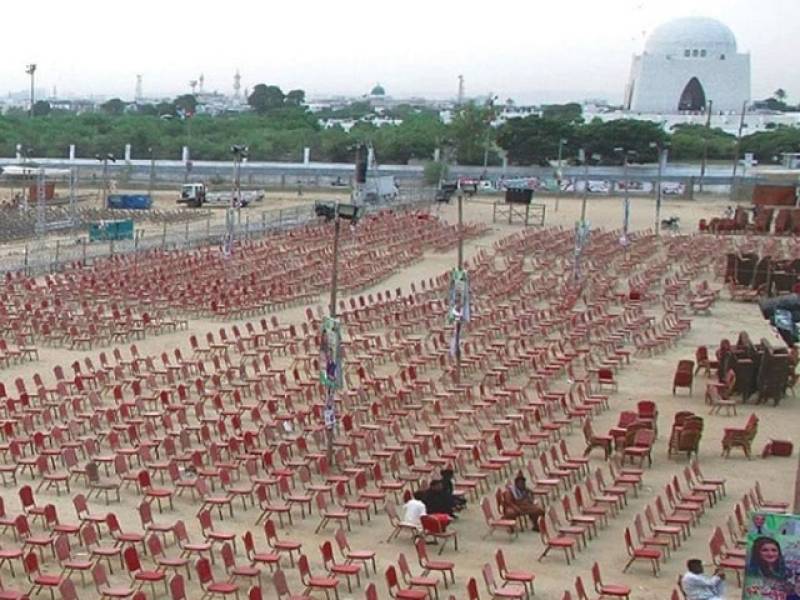 KARACHI – The Pakistan Democratic Movement is all set to stage its second power show today at Bagh e Jinnah Karachi where the 11-party opposition alliance to hold an anti-government rally.

Pakistan People Party with all facilitation from local bodies and political alliances expects to gather a huge crowd to fall the PTI government.

Just two days after a grand show of power in Gujranwala, the 11-party alliance has set up a giant multi-container stage facing the Quaid’s mausoleum.

While there are reports that former Prime Minister Nawaz Sharif is likely to address the rally via video link, no one from the PDM confirmed this.

According to a senior PML-N leader, Maryam will visit Mazar-e-Quaid from Karachi airport after her arrival. She will also attend some of the meetings before the rally in the evening.

The PDM's second rally has occurred at the same time as the anniversary of the Karsaz bombings in 2007. Hence, serving two purposes, the rally would not just be part of the opposition's campaign against the Pakistan Tehreek-e-Insaf-led federal government, but also a remembrance of those who lost their lives in the attack 13 years ago.

“The opposition is going to stage a massive power show, which would tell Imran Khan what the people think about him, “I don’t even have a shadow of a doubt over the success of the PDM campaign.” Earlier Bilawal Bhutto-Zardari told news outlets in brief replies to a couple of queries.

Talking to the media person PPP stalwart Nisar Khuhro said “It will be a historic event where people from across the Sindh will raise their voices against the federal government's incompetence and bad governance, which have put the country on the road to economic destruction, It will be a public referendum against the Centre, which has lost all moral ground for staying in power."

PPP's Karachi division finalized arrangements for the rally on its eve, placing chairs to accommodate up to 50,000 people in the vast ground. Five entry and exit points were set up, with three reserved for male attendees and one for female attendees and PDM leaders.

Opposition party’s flags were hoisted and a 24-foot-high and 160-foot-wide stage was installed.

Besides, a sound system was installed and adequate lighting arrangements were made, PPP sources said.

Being the host for the eve Pakistan Peoples Party also set up different committees, comprising 1,500 volunteers, to ensure proper management of the event and traffic, as well as security inside the ground.

A separate portion has been allocated for female participants also all attendees will be required to wear masks. Party will provide face masks to crowd attendees. Moreover, they will be asked to sanitize their hands at the entrance."

Parties' caravans to escort via different routes to avoid traffic jams. Walkthrough gates along with other security measures have also been made to avoid any unwanted incidents.

A large number of the police and Rangers officers will be deployed at the venue. "Snipers will also be deployed on the rooftops of nearby high-rise buildings for security purposes.