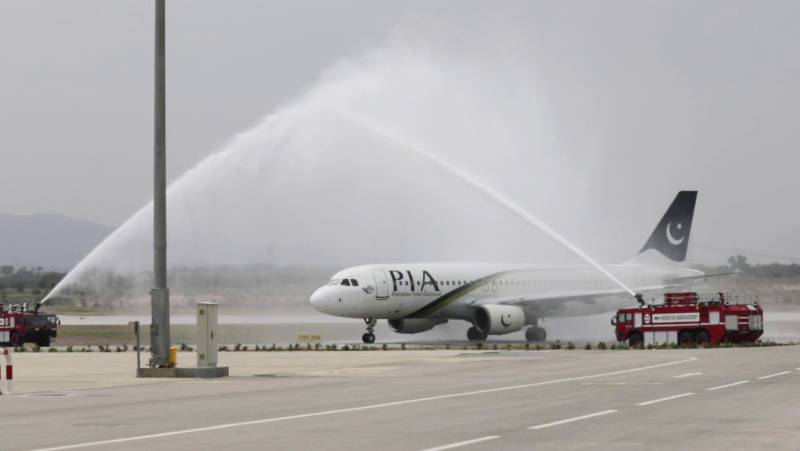 ISLAMABAD – A special flight of Pakistan International Airline flight that landed in Syria’s Damascus after more than 2 decades was flanked by two water cannons.

The national flag carrier kicked off a special flight operation to the Syrian capital for citizens intending to observe Arbaeen - a Shiite religious observance that occurs forty days after the Day of Ashura.

Alhamdolillah, After 22 years, #PIA landed in #Damascus, with #pilgrims with an aim to promote religious tourism & restore relations with Syria in line with the vision of @ImranKhanPTI & @GovtofPakistan. Salute to Amb Air Mshl Saeed M Khan for his great support long live PIA pic.twitter.com/yJgNJZb6jw

PIA will operate 12 direct flights for Najaf, two for Baghdad and four for Damascus from Karachi, Lahore, and Islamabad airports as Pakistan’s national flag carrier aims is to promote religious tourism and restore relations with Western Asian countries.

Meanwhile, the transport minister while commending the development said that the next step will be to convert these special flights into regularly scheduled flights.

ISLAMABAD – Pakistan International Airlines (PIA) has inducted two new Airbus-320 into its fleet, it emerged on ...

On Tuesday, Pakistan International Airlines (PIA) inducted two new Airbus-320 into its fleet. The airline inducted two Airbuses on lease via a tender. One of the Airbuses has reached the country’s federal capital, while another will arrive in a couple of days.