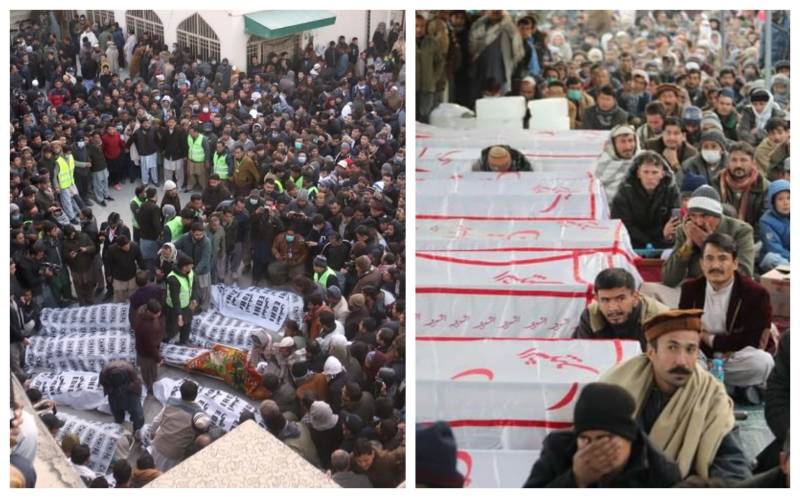 ISLAMABAD – Protests sit-ins over the genocide of Hazara workers ended on the seventh day as the families announced the burial after a senior delegation of government assured mourners to accept their demands.

The funeral prayers of the slain miners, who were killed by the terrorists in Machh, will be offered Saturday (today) at 10:00 AM in Balochistan’s capital.

Sources said the dead bodies of the coal miners have been shifted to Hazara Town from Western Bypass.

Deputy Speaker NA Qasim Suri, Federal Minister for Maritime Affairs Ali Zaidi, and PM’s close aide Zulfi Bukhari along with the Chief Minister Balochistan, in their second visit to the protest camp, assured that the Prime Minister will visit them anytime soon and meet all their demands.

The grieving families were informed that the Chief of the Army Staff Gen Qamar Javed Bajwa and Interior Minister Shaikh Rashid Ahmed will also visit them.

As per the sources, the Army Chief will not accompany the premier and will go separately to meet the Hazara community members.

Earlier on Friday, sit-ins by members of the Hazara community and their sympathizers in major cities came to an end.

According to a Hazara Shuhada Committee member, the development comes after “all of our demands have been accepted.

Protesters blocked main highways across Punjab, Sindh, and Balochistan. In Karachi, five motorcycles were set ablaze as sporadic clashes break out between protesters holding sit-ins in around 30 different areas of the city.

The Hazara community had been protesting since Sunday after 10 coal miners were massacred by terrorists near a coal field in Balochistan's Machh town.