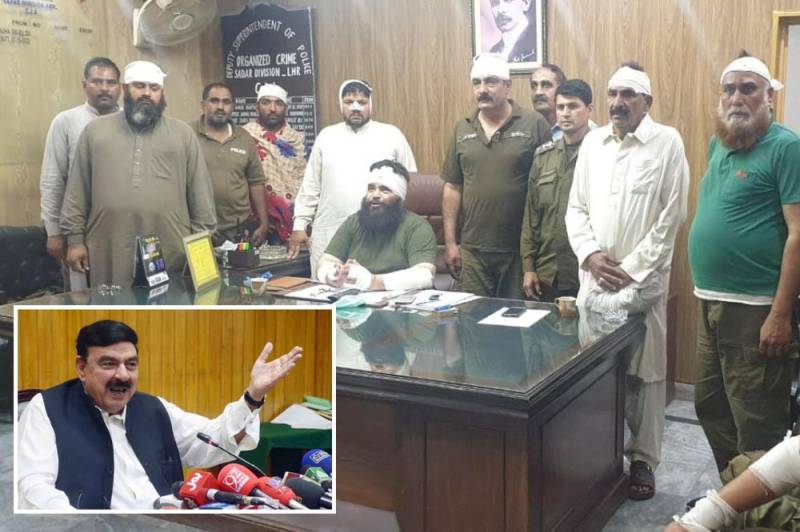 LAHORE – Interior Minister Sheikh Rashid Monday announced that 11 policemen who were taken hostage in the Punjab capital have been released after the first round of talks with banned Tehreek-i-Labbaik Pakistan (TLP).

The official handle of the Interior minister released a video message in the wee hours today. “First round of negotiations have been successful which have led to Tehreek-i-Labbaik Pakistan releasing the policemen it had held hostage. The second round of negotiations will begin after sehri,” the federal minister said in the recent message.

Sheikh further added that the activists of the banned outfit, who were staging a sit-in in front of Jamia Masjid Rahmat-ul-Lil-Alameen, have also dispersed while the police have also returned from the area. Rasheed hoped that all matters with the right-wing party will be solved amicably during the second round of talks.

Earlier, a Lahore police spokesperson said that Lahore CCPO Ghulam Dogar had participated in the operation while heavy contingents of police and Rangers have been deployed at sensitive areas across the provincial capital.

On Sunday, the workers of recently proscribed Tehreek-e-Labbaik Pakistan (TLP) tortured a deputy superintendent of police (DSP) and took him along with four other policemen during an attack on Nawankot Police Station in Lahore.

Police said that the violence occurred after miscreants, in an apparent reference to TLP workers, attacked a police station and abducted the DSP while a TLP spokesperson said the clash started when law enforcers launched an operation to clear the area around Lahore's Yateem Khana Chowk, where workers of the banned party have been staging a protest since earlier this week.