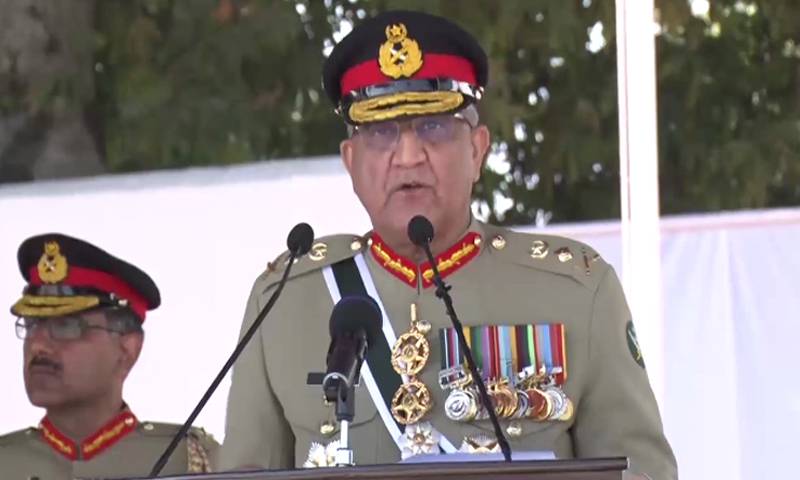 RAWALPINDI – Chief of Army Staff (COAS) General Qamar Javed Bajwa expressed the hope on Friday the Taliban would fulfill the promises they made to the international community on women's and human rights.

According to a statement issued by the Inter-Services Public Relations (ISPR), the Army chief made these remarks during a visit to the Pakistan Military Academy (PMA), Kakul.

Besides reviewing the flag presentation parade as chief guest, the COAS awarded Battalion Standard to 4th Pakistan Battalion, which was raised on October 10, 2016.

Speaking on the occasion, COAS Bajwa said: "We expect the Taliban will fulfill promises to the global community on women's and human rights and Afghan territory won’t be used against any other country".

The COAS said Pakistan wanted peace and progress in the country and the region.

“Pakistan’s sincere efforts to promote and support the Afghan process manifest our vision for a peaceful, economically integrated and prosperous region.”

He said that Pakistan “unambiguously and repeatedly” urged the global community to play its role in an inclusive and unbiased Afghan peace process. “Pakistan has paid a huge price for instability in Afghanistan,” Gen Bajwa added.

”Despite its own economic challenges, Pakistan has hosted over 3 million Afghan refugees for more than four decades.”

He vowed that Pakistan would continue to play its role for peace and stability in Afghanistan that were “direly needed for the entire region and in particular our Afghan brethren.”

He hailed PMA’s role as the premier training institution of the Pakistan Army and commended the faculty and staff for maintaining high standards of training and grooming the young leaders that form the backbone of the army.

Dilating upon future challenges in view of changing dynamics of warfare, according to ISPR, the COAS advised the cadets to wholeheartedly focus on training and remain abreast of the latest advancements in technology to prove equal to the task.

“The Pakistan Army is proud of its young officers who continue to lead their men from the front with courage and devotion to defend the freedom of motherland,” he was quoted by the military’s media wing as saying.