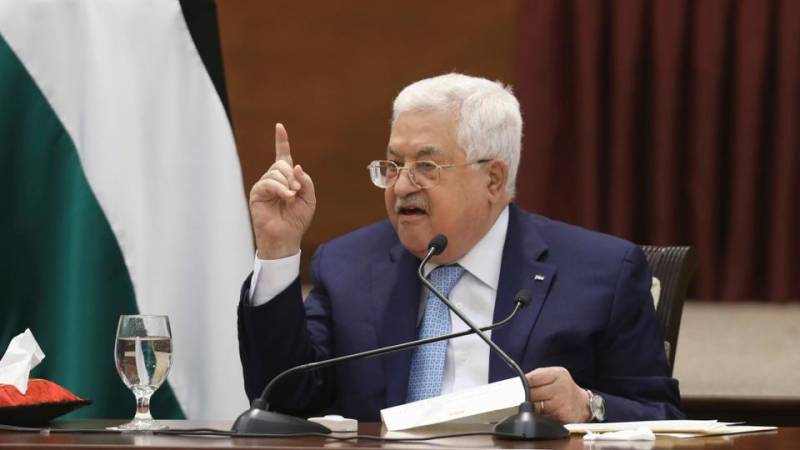 ISLAMABAD - Palestinian President Mahmoud Abbas on Wednesday declared an end to the agreements and understandings signed with Israel and the United States and turned over responsibility on the occupied territories back to Israel.

“The Palestine Liberation Organization and the State of Palestine are absolved, as of today, of all the agreements and understandings with the American and Israeli governments and of all the obligations based on these understandings and agreements, including the security ones,” Abbas declared at an emergency meeting held in Ramallah, the Palestinian city located in the West Bank.

The meeting was held to discuss Israeli plans to annex parts of the occupied Palestinian land as declared in the new Israeli government’s coalition agreement, the embassy of Palestine in Islamabad said here quoting Palestinian News Agency, Wafa.

President Abbas said the Israeli occupation authority had to shoulder all responsibilities and obligations in front of the international community as an occupying power over the territory of the occupied state of Palestine, “with all its consequences and repercussions based on international law and international humanitarian law, particularly the Fourth Geneva Convention of 1949”.

In his speech, President Mahmoud Abbas referred to the provisions of the Israeli government coalition agreement, which stated that “the Prime Minister will be able to bring the agreement that was reached with the United States on applying sovereignty starting on 1 July 2020 to the Cabinet and the Knesset'” He also mentioned the speech of the Prime Minister of the occupation government at the Knesset the day before yesterday, which he said, did not include anything about commitment to the signed agreements, rather asserted the application of Israeli sovereignty on the Israeli colonies in the Palestinian territories.

The Palestinian president rejecting the so-called “deal of the century” said it meant that the occupation authority had annulled the Oslo Agreement and all agreements signed with it.

He said the American administration recognized Jerusalem as capital of Israel and moved its embassy there, its publication of the deal, which set the base for the Israeli annexation declaration as a blatant violation of the resolutions of the international legitimacy and international law.

He reiterated firm adherence to the right of Palestinian people to continue in their national struggle to end the occupation and establish the independent, contiguous and sovereign state of Palestine on the June 4, 1967 borders with East Jerusalem as its capital, solve the refugee issue based on the Arab Peace Initiative and release of the Palestinian prisoners from Israeli jails and detention centers.

He held the American administration fully responsible for the oppression befalling the Palestinian people, terming it a “primary partner with the Israeli occupation government in all its aggressive and unfair decisions and measures against our people”.

“We vow to our martyrs and heroic prisoners and wounded that we will remain loyal to the oath until victory, freedom, independence and return, to raise together the flag of Palestine over Al-Aqsa Mosque and the Church of the Holy Sepulcher in our Jerusalem, the eternal capital of our Palestinian state,” he said.