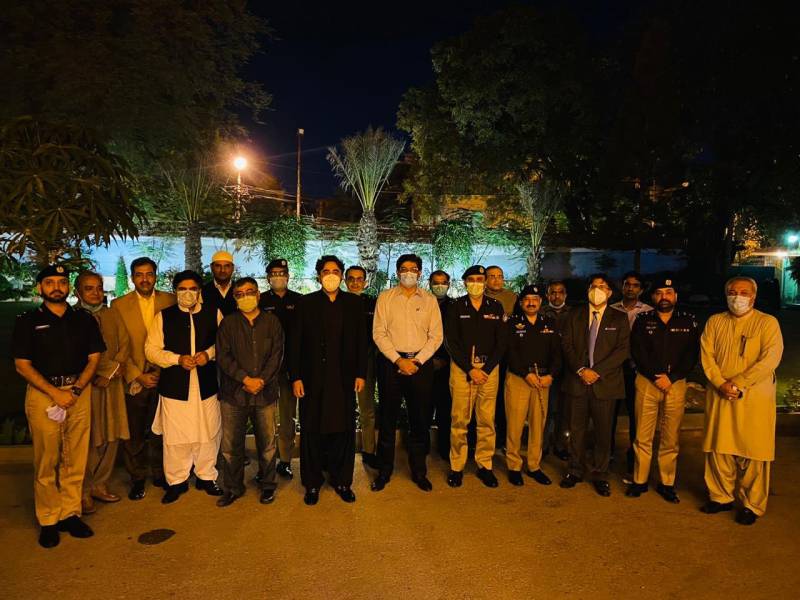 KARACHI – Pakistan Peoples Party (PPP) Chairman Bilawal Bhutto has managed to persuade the Sindh police officer to continue their jobs after they jointly applied for leaves over facing pressure in a matter related to the arrest of PML-N leader Captain (retd) Safdar.

Following the shocking move by a police officer, Bilawal reached Sindh IGP House to express solidarity with police officers and held meetings with IG Mushtaq Ahmad Mahar and other officers.

Sharing a picture along with police officers on Twitter, the PPP chief wrote: “I stand in solidarity with Sindh Police, do you?”

I stand in solidarity with Sindh Police, do you? #WeStandWithSindhPolice pic.twitter.com/Gp1asUFK5B

During the meeting, Bilawal asked the IGP Mushtaq Ahmed Mahar and other officers to continue to discharge their duties. He also lauded the role of police for peace in the province.

"I have been assured by army chief about a transparent investigation into Karachi incident," he told the IGP, adding that the provincial government is also conducting an inquiry.

Sindh government also said that leave applications will not be accepted.

Later, Sindh police in a tweet said: “IG Sindh has decided to defer his own leave and ordered his officers to set aside their leave applications for ten days in the larger national interest, pending the conclusion of the inquiry”.

IG Sindh has decided to defer his own leave and ordered his officers to set aside their leave applications for ten days in the larger national interest, pending the conclusion of the inquiry.

In identical applications, the officer said, “… in the recent episode of registration of FIR against Capt Safdar in which police high command has not only been ridiculed & manhandled, but all ranks of the police have been demoralised and shocked”.

“In order to come out of this shock and settle down I may kindly be granted 60 days earned leave,” read the application.

Bilawal said that police is shocked after some persons surrounded the house of Sindh IGP Mushtaq Ahmed Mahar and took him to an unspecified location at 4am on Monday hours before the arrest of Captain Safdar.

He demanded that the identity of the persons should be revealed. He also termed the arrest of Safdar, who along with his wife Maryam Nawaz and other party leaders in Karachi for attending a public gathering under the banner of PDM.

Minutes after his demand, Chief Army Chief Gen Qamar Javed Bajwa has taken notice of issues and ordered an inquiry into the matter.

A statement issued by the Inter-Services Public Relations says, “COAS has directed Commander Karachi Corps to immediately inquire into the circumstances to determine the facts and report back as soon as possible”.