Who is Chuck Feeney, and why top Pakistani leaders are praising him? 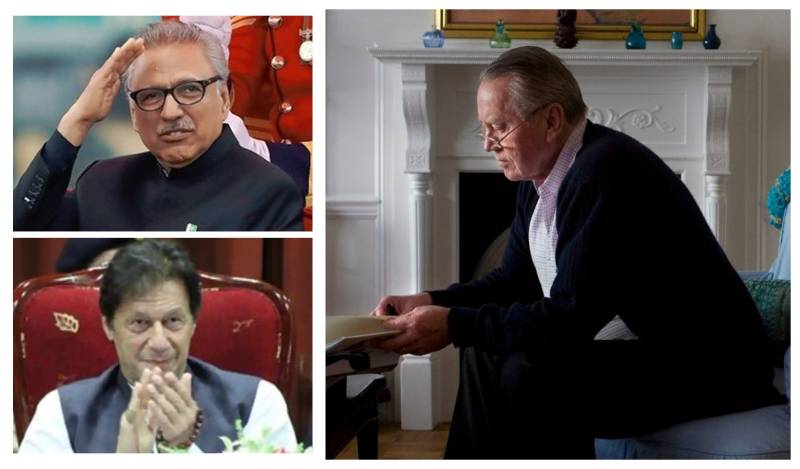 ISLAMABAD – Pakistan's President Dr Arif Alvi on Sunday lauded Chuck Feeney, an Irish-American business tycoon, who has given away his entire US $8 billion fortune in charity.

On his twitter account, the president also quoted words of his father late Dr Habibur Rehman Alvi about charity work and prayed for the high ranks of the departed soul.

“What a great man is Chuck Feeney! My late father Dr Habibur Rehman Elahi Alvi used to say, ‘What I give in charity is what I take to the hereafter’ & ‘Giving is living in both worlds’. May his soul rest in peace, he was similar in spirit and action,” the tweet read.

The president also tagged yesterday’s tweet of Prime Minister Imran Khan who had named Feeney’s act as a “true richness.”

“This is what I call true richness – a liberated soul,” the prime minister said on twitter while referring to American billionaire’s achieving his mission of donating all his wealth during his life.

What a great man is Chuck Feeney! My late father Dr Habibur Rehman Elahi Alvi used to say, 'What I give in charity is what I take to the hereafter' & 'Giving is living in both worlds'. May his soul rest in peace, he was similar in spirit and action. https://t.co/kEvqWkIHo5

Who is Chuck Feeney?

For the past 38 years, Feeney, an Irish American who made billions from a duty-free shopping empire, had been making endowments to charities and universities across the world.

Feeney, who gave most of his money away in secret, hoped that more billionaires would follow his example and use their money to help address the world’s biggest problems.

Feeney, 89, achieved goal of his life by giving away his entire wealth. He had set up the Atlantic Philanthropies foundation during 1982.

Feeney was quoted by Forbes Magazine “We learned a lot. We would do some things differently, but I am very satisfied. I feel very good about completing this on my watch.”

In his foundation’s report, “Zero is the Hero” Feeney once said, “I see little reason to delay giving when so much good can be achieved through supporting worthwhile causes. Besides, it’s a lot more fun to give while you live than give while you’re dead.”

The grandson of immigrants from County Fermanagh, Northern Ireland, he has also donated $1.9bn to projects in the country, as well as the Republic, where he was instrumental in the founding of the University of Limerick. He also helped behind the scenes during the peace process.

In 2003 he joined the protest march through London against the invasion of Iraq, according to the Guardian.

Feeney has five children, four daughters and one son, with his first wife Danielle. All the children were instructed to work summers as waiters or chambermaids. He later married Helga, a former secretary.

Feeney’s generosity spurred Bill Gates and Warren Buffett to establish the Giving Pledge, under which the world’s richest people commit to giving away at least half their wealth to charity.

PESHAWAR – The tourism scope of Pakistan especially of the Khyber Pakhtunkhwa has been ...