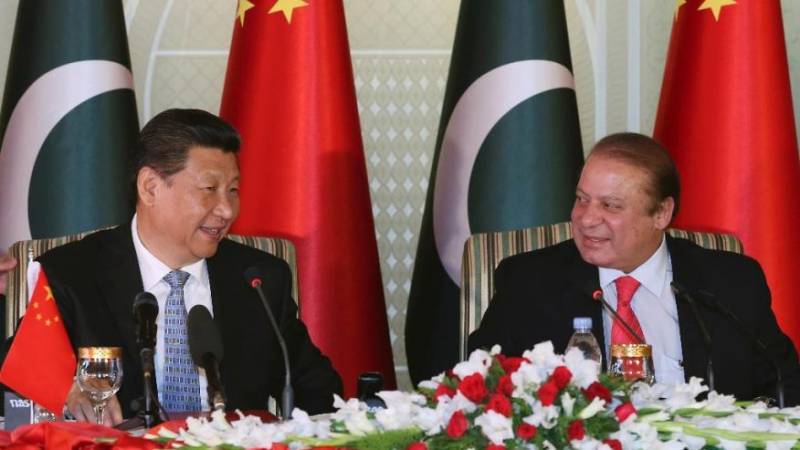 ISLAMABAD ( Web Desk) - China says its people will always stand by the people of Pakistan in the endeavour for achieving the goal of socio-economic development and prosperity.

He expressed the confidence that Pakistan will be successful in overcoming all challenges it is facing, with the cooperation of China.

"Pakistan is a great country which has great civilizations and we are good friends, brothers, and partners who have developed all weather strategic partnership," Jinping said. Both the countries always move together on all regional and international issues, he further added.

The president said the Chinese people have great respect for the people of Pakistan and have very good wishes for the development and progress of Pakistan.

He said he choose Pakistan as first country to visit during the current year which reflects out deep rooted love and affection besides our desire to give new impetus to our relations with it.

Jinping said Beijing and Islamabad have been of tremendous support to one another, adding both countries have stood by each other in times of need. He also referred to the assistance offered by the two countries to one another in the events of natural disasters.

"Pakistan is the first foreign country that I visit this year and [it is my] first visit to your country, but Pakistan is not at all unfamiliar to me," he said.

"It has made tremendous efforts and endured enormous sacrifice."

He also lauded Islamabad's anti-terror efforts, saying Pakistan had shown great character and courage in the face of adversity. "Pakistan has stood on the frontline in the international fight against terrorism," said Jinping.

President Jinping said he and his colleagues have been overwhelmed with the warm welcome extended to them by Pakistan. "During my current visit, President Mamnoon Hussain, PM Sharif and I jointly agreed to elevate China-Pakistan relations to an all-weather strategic partnership," he said.

Jinping arrived at the Parliament House on Tuesday where he addressed a joint session of the National Assembly (NA) and the Senate on the second and last day of his visit to Pakistan.

Regarded as a historic visit, Jinping's trip to Pakistan is being viewed as one of game-changing proportions with the region’s developing geo-strategic landscape. It comes at a time when Tehran and the west have successfully managed a deal over Iran’s nuclear programme and as Islamabad treads a tricky terrain over its position on the conflict in Yemen.

Ties with New Delhi have not been able to overcome the snags that developed in recent few months and relations with the United States have been relatively lukewarm.

Prime Minister Nawaz Sharif also expressed his gratitude to the Chinese president and his delegation for their visit to Pakistan.

"You are not just a friend from afar, but one who is so close to our heart," he said.

The premier acknowledge Mr Jinping's strong association with Pakistan. "We are friends forever. We are close friends, dear brothers and trusted partners," he said.

He said all political parties of Pakistan have a united stance that Pakistan should have a robust bond with China.

He also appreciated China's solidarity with Pakistan in "our quest for peace and stability in South Asia".

Talking about the mega-project of Pakistan-China Economic Corridor, PM Nawaz Sharif said, "It is a catalytic project that will help us combine the geo-economic streams of our countries."

"The corridor symbolises our commitment to create win-win partnerships which threaten none and benefit all," he further said.

The premier said young entrepreneurs, academics, media persons, teachers, students and professionals from both countries will sustain their friendship and make it even more productive.

After the joint session concluded, Prime Minister Nawaz Sharif and President Xi Jinping departed for the Presidency in a horse-drawn carriage where President Mamnoon Hussain is to host a luncheon in Mr Jinping's honour.