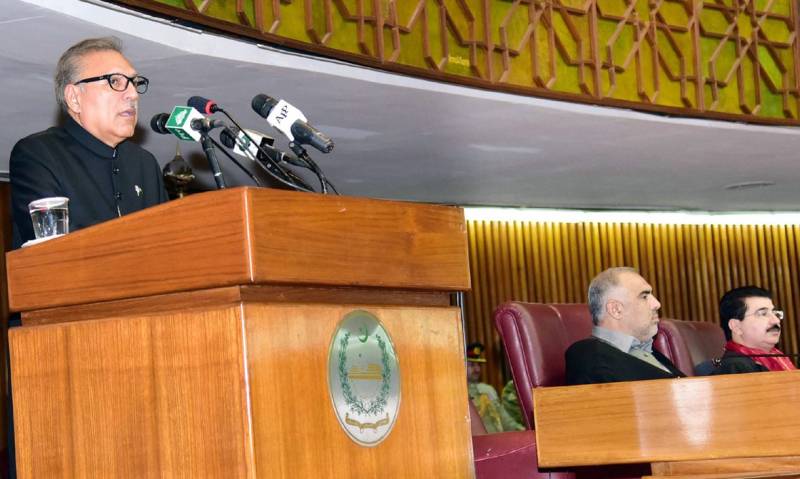 ISLAMABAD – President, Dr Arif Alvi said all the state institutions of the country including parliament, army and judiciary are on the same page with a united approach of ensuring rule of law and social justice for the people.

While addressing the joint sitting of parliament on the start of new parliamentary year in Islamabad, the President touched upon several issues, from the government’s pro-active foreign policy, strategy to deal with the coronavirus pandemic, improvement in economic situation and launch of social welfare projects which have altogether put the country on path to prosperity.

He said it is the success of nation which always stood solid with resilience to deal every challenge.

The President said the government put the country’s policy in right direction in view of challenging international and regional scenario.

He lauded Prime Minister Imran Khan’s recent policy statement where he said Pakistan would not recognize Israel until the Palestinians were given their due rights.

He termed the stance in line with the views of Quaid-e-Azam Muhammad Ali Jinnah on Palestine.

He said India is trying to impose the ideology of Hindutva against Muslims and other minorities in the country, the Radio Pakistan reported.

Dr Alvi urged the world to take notice of the military siege in the Indian Illegally Occupied Jammu and Kashmir.

He thanked China, Turkey, Malaysia, Iran and Azerbaijan for their strong support to Pakistan on the issue of Jammu and Kashmir, and condemning the Indian atrocities.