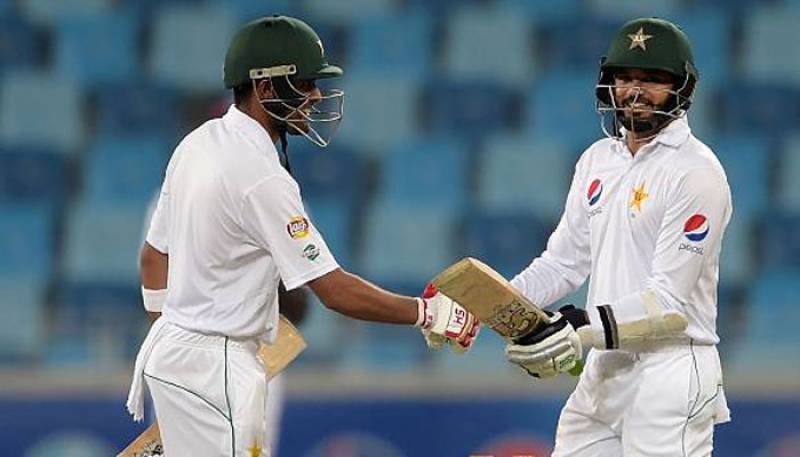 BENONI - Azhar Ali and Babar Azam hit centuries on the second day of a three-day match against a South African Invitation XI at Willowmoore Park on Thursday in Pakistan's only warm-up match ahead of a Test series against South Africa.

Azhar made exactly 100 and Babar scored 104 not out before the Pakistanis declared on 306 for seven, 12 runs behind the Invitation team's first-innings total. The Invitation XI were 45 for one at the close, an overall lead of 57.

The Pakistanis were struggling on 112 for five before Azhar and Babar came together in a sixth-wicket partnership of 155.

Azhar survived a mini-collapse in which three wickets fell in the space of 19 balls and played a solid inning, during which he hit 12 fours and three sixes.

Babar stroked 11 fours and three sixes during a 129-ball inning.

Opening batsman Fakhar Zaman faced 40 balls and scored 19 runs in a comeback innings following a knee injury which he suffered in a limited-overs series after he made 94 and 66 on Test debut against Australia in Abu Dhabi in October.

Fakhar was bowled by fast bowler Thando Mnyaki, who took three for 45. Mnyaki sparked the Pakistani middle-order collapse when he bowled Shan Masood for 41 and had Haris Sohail caught behind for four.

Left-arm fast bowler Mohammad Amir recalled to the Pakistan Test squad, struck early in the second innings when he bowled Josh Richards for eight. Richards scored 98 in the first innings.

Mohammad Abbas, recovering from a shoulder injury, again did not bowl in the second innings.