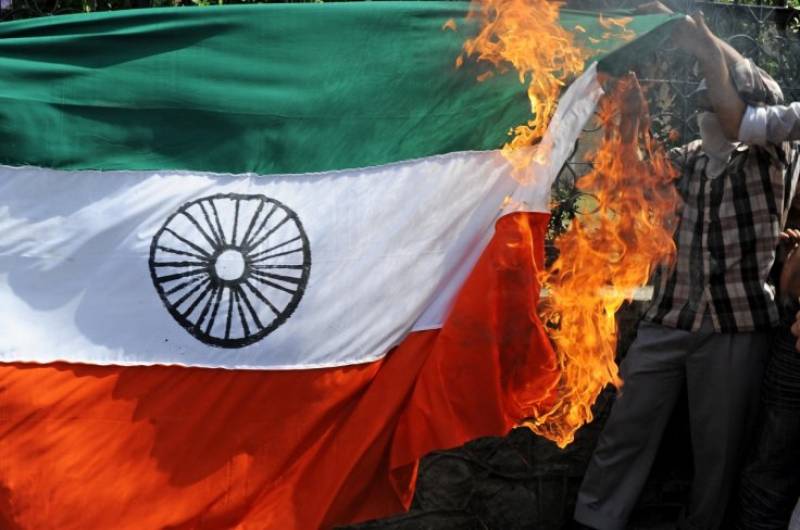 Facebook
Twitter
Reddit
WhatsApp
LONDON/ NEW YORK/TORONTO - Hundreds and thousands of Sikhs and their supporters from various countries of the world call to burn Indian flags to protest against continuing atrocities against minorities and bloodbath in Indian Occupied Kashmir (IOK) on 26th January.

The protests will be organised in London, New York, Toronto and different EU countries by the US and Canada-based group Sikhs for Justice.

Should a Sikh have an issue with burning the #Tricolor ??? NOT if he/she is a #Sikh and knows what the #Tricolor has done to his/her kom in the last 70 year. #BurnTheTricolor #India @PMOIndia @timesofindia @htTweets @the_hindu #khalistan #Kashmiri #Punjab @PTC_Network pic.twitter.com/8WcrobNVZy

Sikhs have been protesting worldwide against Indian atrocities for a long time. Sikhs for justice regularly organize protests and have recently organized protests in UK, US and Canada where a large population of Indian Sikhs in exile lives.

They chanted slogans and hold banners reading “Free Punjab, End Indian occupation”, “Punjab Referendum 2020 for Khalistan” and “We will re-establish Punjab as an independent country”.

The pro-Khalistani supporters shouted slogans such as ‘Khalistan Zindabad’ and waved anti-India placards.

Sikhs for Justice (SFJ) said their protests are intended to raise awareness for a non-binding referendum in 2020, calling for the Sikh-majority state of Punjab to be granted independence.

They believed the high turnout would put pressure on the United Nations to ask India to hold a plebiscite.

Gurpatwant Singh Pannu, the legal adviser of the Sikhs for Justice, announced the adoption to three resolutions on the occasion.

In the first resolution, it is said that a non-governmental referendum will be held in November 2020 in all countries of the world, in Punjab and in all cities of India where Sikhs were subjected to genocide in 1984.

In second resolution it is said that the United Nations and the International Law recognises that if peoples have district identity, territory and religion – then these elements help peoples to claim their separate state, therefore after non-government referendum in November 2020 the claim of independent Khalsa raj (Sikh state) will be presented to the United Nations.

In the third resolution, it is said that after presenting the claim of Sikh state to the United Nations the movement of separate Sikh state a mass movement for the establishment of such state will be initiated. In this resolution, the organisers called upon the gathering to show their commitment to the cause of Khalistan and then they themselves vowed to carry on their move for Khalistan.