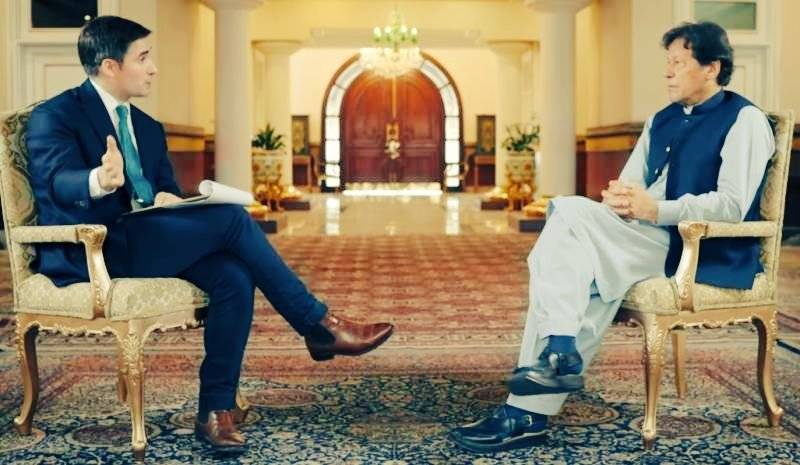 ISLAMABAD – Prime Minister Imran Khan has again created a stir over comments he made about rape and "temptation" in Pakistan.

In an interview with Axios HBO - aired on Sunday and shared on Saturday on Axios' website –the Pakistani premier was asked if he thinks what women wear has any effect on the temptation that leads to sexual crimes.

“You were asked about the epidemic of sexual violence and rape in Pakistan and you acknowledged the seriousness of the problem and you spoke about Pakistan’s strict laws. You were also quoted as saying that the practice of women wearing veils “is to stop temptation not every man has willpower”. You said on increasing vulgarity, it will have consequences and you were accused of rape victim blaming. How do you respond to that?” asked the interviewer, Jonathan Swan.

Khan responded, “If a woman is wearing very few clothes, it will have an impact on the men, unless they’re robots. I mean it is common sense.”

"This is cultural imperialism. Whatever is acceptable in our culture, must be acceptable everywhere else. It's not," he added.

Anchorperson: You were accused of rape victim blaming, how do you respond to that?

PM Imran Khan: It is #SuchNonsense

When asked if it really provokes acts of sexual violence, Khan said: “It depends on which society you live in. If in a society where people haven’t seen that sort of thing, it will have an impact on them. If you grow up in a society like you, maybe it won’t on you. This cultural imperialism, whatever is in our culture, must be acceptable to everyone else, it’s not.

Khan further elaborated that he had said the concept of purdah (veil) and the concept of purdah is to avoid temptation in society. “We don’t have discos here, we don’t have nightclubs, so it is a completely different society, way of life here, so if you raise temptation in society to the point and all these young guys have nowhere to go, it has consequences in the society.”

traction as people began discussing his comments, with opposition leaders and journalists expressing anger and disgust against the 'misogynistic' ideology.

it isn’t complicated and you don’t need to be a feminist or a gender studies PhD to understand it.

what does the argument that rape is a product of the rapists’ environment show?

it shows an intent to absolve rapists of the responsibility for their actions.

Men are not “robots”, he says. If they see women in skimpy clothes, they will get “tempted” and some will resort to rape

Only 3 days after a child was raped by a cleric, Imran Khan chooses to blame "few clothes" worn by women for rape culture.

Its not a slip of tongue. Such victim blaming is a consistent position held by IK since the motorway incident last year. Our PM is a rape apologist.

Axios had already released his comments about the US and Afghanistan ahead of the interview's broadcast.

In April, Khan blamed "obscenity" for the rise in sexual violence cases in Pakistan during a live television interview and advised women to cover up to prevent temptation. "This entire concept of purdah is to avoid temptation. Not everyone has the willpower to avoid it," he said.

Official data released by Pakistan reveals that at least 11 cases of rape are reported in the country every 24 hours. As many as 22,000 such cases have been reported to the police over the last six years. However, the conviction rate of rape convicts in Pakistan is an abysmal 0.3 per cent.

Last December, Pakistan's President Arif Alvi approved the Anti-Rape Ordinance 2020 to set up special courts to try cases of sexual abuse of women and children. The legislation mandates legal proceedings in such cases to be completed within four months.