‎Thanks my love for coming in my life: Aamir Liaquat says to wife on first wedding anniversary 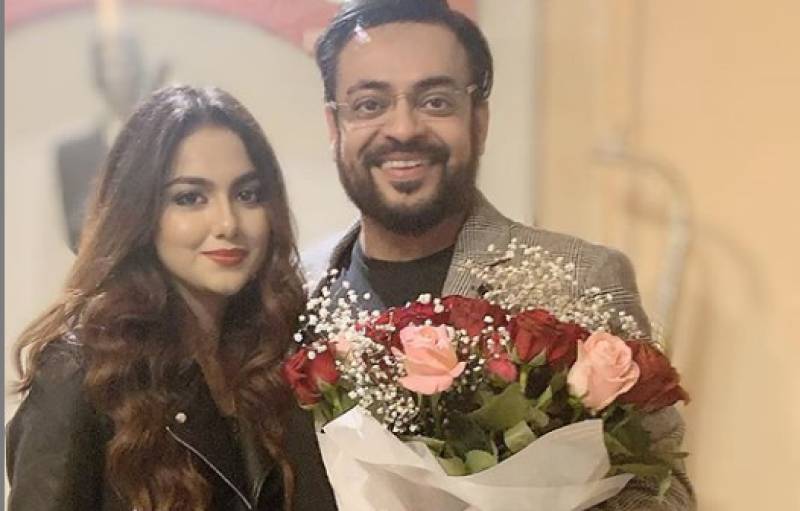 LAHORE- Whether you're celebrating a year or two decades together, wedding anniversaries are an excellent opportunity to honour your other half and express what marriage has meant to you. Take it from  Aamir Liaquat and Tuba Aamir, who used Instagram to elevate their first wedding Anniversary wish into full-blown public declarations of love.

November 16, 2019, marked their one year of marriage and the couple posted pictures with each other on their social media.

‎Thanks my love for coming in my life!! ‎16th Nov 2018 was the day when we have faced together the storm of envy & enmity from so called virtuous elements of our society who believed in fornication but refused the Sunnah of ﷺ , the Nikah and forget the meaning of ⁦‪#GharBasana‬⁩ in ⁦‪#OxfordDictionary‬⁩ 🙏 @syedatubaaamir #syedatuba #tubaaamir #aamirliaquat

“‎Thanks my love for coming in my life! ‎November 16, 2018, was the day we faced a storm of envy & enmity together, from so-called virtuous elements of our society who believed in fornication but refused the Sunnah of the Prophet (PBUH), the Nikah and forget the meaning of ⁦‪#GharBasana‬⁩ in ⁦‪#OxfordDictionary‬⁩.”

This was followed by Tuba Aamir’s appreciation post that expressed her love and admiration for her beloved husband.

Tuba also uploaded a picture of herself wearing a black leather jacket while holding a heart-shaped bouquet of roses. Her caption stated that she had a fun weekend celebrating both her birthday and her anniversary .

"Thank you for an amazing weekend, everyone. The celebrations have just begun ???? but I want to THANK YOU for all the love, prayers and wishes on my birthday and our anniversary @iamaamirliaquat it has filled my heart with happiness ♥️ Alhamdullilah" wrote Tuba.