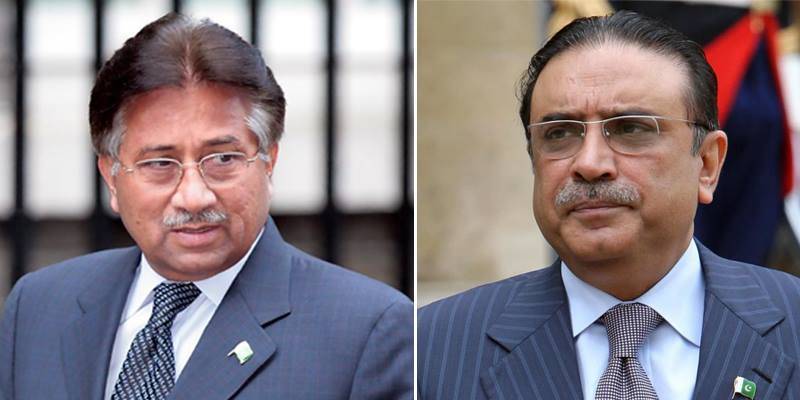 In a series of video messages released on Thursday, the former president claimed that the one man who could be blamed for the killing of both PPP leaders could be the current co-chairman of PPP, Asif Ali Zardari.

Musharraf stated that he kept mum over the recent verdict issued by a Rawalpindi court regarding Benazir murder case, in which two police officers were punished but as Zardari blamed him for the murder, he had to speak out.

"Only one individual was a beneficiary of Benazir's murder and that was Asif Ali Zardari" Musharraf said while addressing the Bhutto family.

He clarified that there was no doubt about the involvement of Baitullah Mehsud in the murder of slain PPP leader, however, it was needed to track out the one behind all the conspiracy.

He maintained that Baitullah Mehsud was his rival who also attacked him for which the government wanted to eliminate him and so there was no possibility of him colluding with Mehsud.

"How could I have an influence over Mehsud when I was against him?" the former president said and added that there was a possibility of Zardari's links with former Afghan President Hamid Karzai and influential Afghan officials that could have been used to hatch a conspiracy against Benazir Bhutto.

Musharraf declared that the security arrangements were absolutely fine till Benazir addressed the audience and moved towards her bomb-proof vehicle, adding that it was important to talk about who kept transmitting messages to Benazir to come out of the sun-roof.

"The mobile phone which received those messages went missing and was found after two years," claimed Musharraf, who added that all the data must have been removed then.

Pervez Musharraf also discussed the role of Security Incharge of Benazir, Khalid Shahanshah and noted that he was murdered in unusual circumstances days after the December 27 tragedy.

"Without a doubt, I am sure that if we dig deep into the details, we would track the murderer and that would be Asif Zardari," added Musharraf.

He concluded his message by saying that if Bilawal, Bakthawar and Asifa would listen to his message with an open mind, they would be able to rationally understand it.