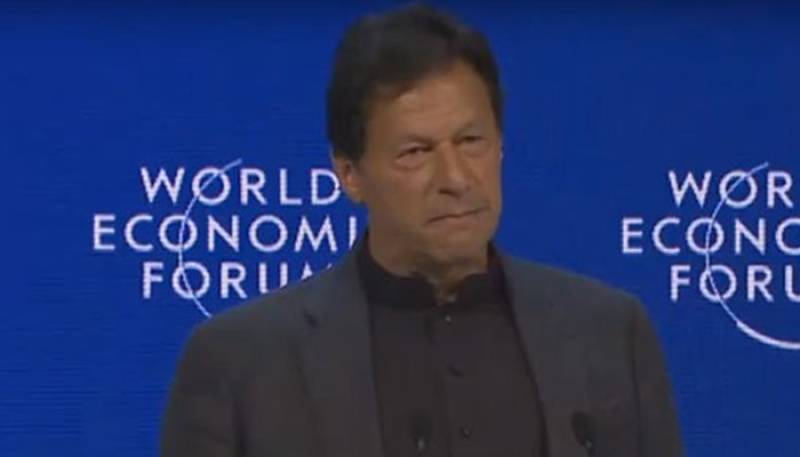 DAVOS - Prime Minister Imran Khan on Wednesday delivered his keynote speech at a summit being held under the World Economic Forum 2020 in Davos, Switzerland.

He started his address by shedding light on Pakistan's natural beauty, besides revealing his wish to ensure the preservation of the God-gifted beauty of the country.

Highlighting his initiatives in this regard, he reminded that his government in 2013 launched the ambitious project to plant a billion trees in Khyber Pakhtunkhwa and accomplished it.

The project has now been expanded to across the country under which ten billion trees will be planed in Pakistan in next four years, he said.

He also highlighted the motives behind the plantation drive, saying the steps were being taken to counter the growing global warming.

"Secondly; our cities have become extremely polluted. For example, Lahore, Dehli etc. our planners have removed 70 percent of our tree cover from our cities."

The premier clarified at the forum that Pakistan will never be part of any conflict and resolved to play the role for peace.

"We also realized that you cannot make your economy grow unless there is peace and security."

He recalled how the militancy took root in Pakistan and hindered its growith.

"Form the 1980’s when Pakistan allied with the US to fight the soviets, we had militant groups trained in Pakistan to fight guerrilla battles.

When the Soviet’s left, we were left with the militant groups. That became a watershed in Pakistan with the rise of gun culture, armed militias and drug trade. This became an impediment to our growth as a nation.

Come 9/11, the US came back and we were engaged to fight these same groups. 70,000 people were killed in the process."

Highlighting Pakistan's peace role in current scenario, he said: "We have tried to play our part in easing tensions between Saudi Arabia and Iran. We are part of facilitating talks in the peace process in Afghanistan. This is the closest the region stands to a peace process".

He said that his government inherited the biggest fiscal deficit with reserves that would only last a month.

"We had to take such tough economic decisions; I’ve been in the public eye for 40 years and I’ve never face a public backlash like I have in the one past year".

He informed that Pakistan is now heading in the right direction due to the policies of his economic team. "Our investment percentage has grown 200%, our ease of doing business rankings has gone up by 20 points".

"Our biggest advantage is our population; 60% of our 200 million plus people are under the age of 30 and this is the biggest asset our country has."

"The other advantage Pakistan has is mineral wealth; sadly untapped. Pakistan is sitting on big gold and copper reserves. We have enough reserves to pay off our foreign debt," he said.

Highlighting the regional potential, he said: "On one side of Pakistan there is China, one of the world’s biggest markets. On the other side Central Asia with its resources and markets to open up once there is peace in Afghanistan".

Peaceful relations with India can also boost trade potential of the regional, he highligted.

He sad, "I am someone who believes that if we get our governance right, we will resolve a lot of issues. The way our governance deteriorated, in the past, is one of the main reasons why we have not been able to realize our potential."

"With our strategic location and a young population, If we improve our governance and our institutions, nothing can stop us from realizing our potential."