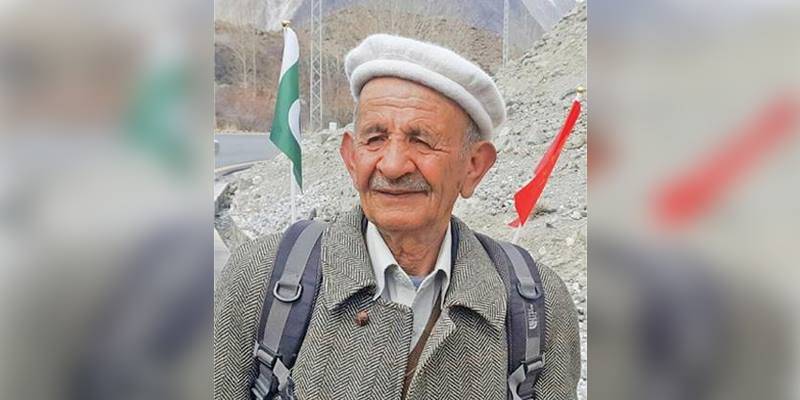 KARIMABAD - In what appears to be an unprecedented adventure, a 78-year-old man hailing from the picturesque village in Hunza valley started a 100-kilometre walk on Wednesday, in a bid to pay tribute to the doctors of Red Army of China.

The 'young at heart' elder embarked on the three-day walk on the Karakoram Highway from his native village in upper Hunza to Aliabad carrying Pakistani and Chinese flags on his back because the Red Army had saved his life 40 years ago during the construction of KKH.

Detailing how his life was saved by the Chinese doctors, Ali expressed that when he was 38 years old in 1968, he became paralysed due to an undiagnosed severe pain in his legs and at that time the area had no medical facility, nor had local people easy access to other areas of the country.

He elaborated that at that time locals used traditional methods to treat diseases, but his case was different as the disease was undiagnosed and all the methods failed to cure it.

The valiant senior continued that in 1968 during construction of KKH, doctors of Red Army of China set up medical camps at various areas including the one in Passu village of upper Hunza to provide medical facility to labourers, engineers as well as to the locals, Dawn News reported.

'I was hospitalized immediately in this facility and was treated by the Chinese doctors and became fully healthy after two-month treatment,” he expressed in joy.

Expressing his delight over the services rendered by the medics, some 4 decades back, Ali conveyed that on the occasion of Nauroz he decided to start the walk from his home-town as a gesture of thanking the Chinese doctors and celebrating Pak-China friendship.