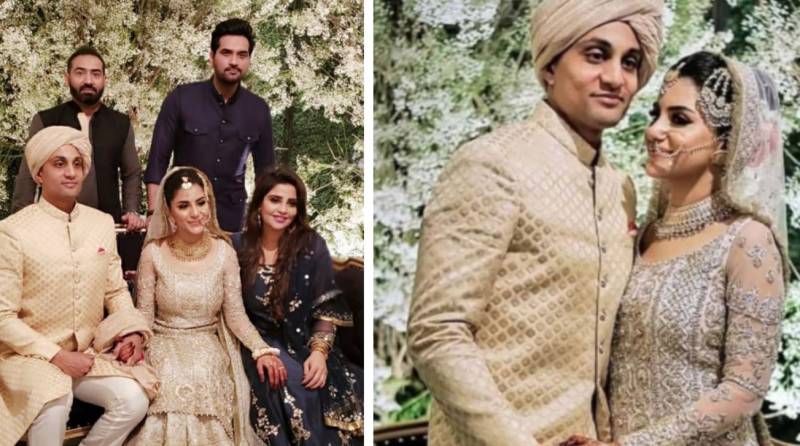 KARACHI – Pakistani actress and model Sohai Ali Abro and first-class cricketer Shehzar Mohammad tied the knot in an intimate ceremony surrounded by their family and friends on Sunday.

The groom Shehzar Mohammad is the grandson of former legendary test cricketer Little Master late Hanif Mohammad. Abro, known for her matchless acting skills, can be seen wearing an off-white traditional bridal dress while Shehzar donned a golden Sherwani on a special day of his life.

Pictures of the newly-wed couple are doing rounds on social media as the followers and relatives extended warm wishes to the couple for beginning a new journey.

Actor and producer Humayun Saeed also took to Instagram and posted the picture with the new couple. Mere Pass Tum Ho actor wrote ‘Many congratulations to Sohai and Shehzar. May Allah bless you both with lots and lots of happiness, prosperity and a lifetime of togetherness.’

Sohai Ali Abro was born in 1994 in Larkana, Sindh. The 26-year-old is the youngest of siblings. She got her early education from Sukkur. The Prem Gali actor started her career as a model and later appeared in many commercials besides working in several dramas and films. She is famous for her role in Tanhai, Pyaray Afzal, Jawani Phir Nahi Ani, and Motorcycle Girl. In the year 2019, Abro signed her Hollywood debut movie named The Window.

LAHORE - Pakistani TV star Sohai Ali Abro is all set for her Hollywood debut as she has recently signed in a leading ...

Shehzar Mohammad was born in 1991 in Karachi, Sindh. Son of cricketer Shoaib Mohammad is also a Pakistani first-class cricketer. Mohammad also played for Sindh’s squad for the 2019–20 Quaid-e-Azam Trophy tournament.