Mother of Nawaz, Shehbaz Sharif passes away in London 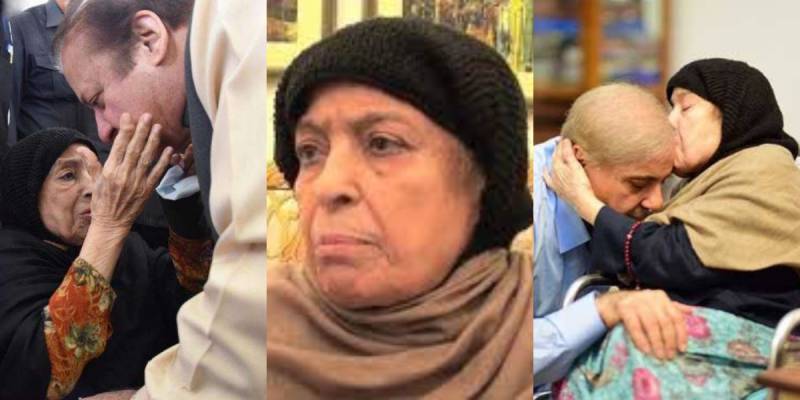 LAHORE – The mother of former prime minister Nawaz Sharif and former chief minister Punjab Shahbaz Sharif passed away at the age of 89 in London on Sunday.

Her death was confirmed in a tweet by Pakistan Muslim League-Nawaz (PML-N) leader Atta Tarrar.

Begum Shamim Akhtar was receiving treatment at a London hospital and her body is currently kept at the Avenfield Apartments. She had developed a severe chest infection and was suffering from an advanced stage of Alzheimer's Disease.

Tarar said that he spoke with Suleman Shahbaz who confirmed the death and said that arrangements are being made to bring the body to Pakistan for burial.

Shehbaz Sharif and son Hamza Shehbaz who are in jail were informed about the demise of Begum Shamim Akhtar.

Sources in the party said that the deceased will be buried alongside her husband, late Mian Muhammad Sharif, at their Jati Umra residence near Raiwind.

In their separate condolence messages, both President Arif Alvi and Prime Minister Imran Khan expressed their grief and sympathised with the bereaved family.

National Assembly Speaker Asad Qaiser and Deputy Speaker Qasim Khan Suri, in their separate condolence messages, conveyed their heartfelt grief to Nawaz Sharif Mian Shehbaz Sharif and prayed for the solace of the departed soul and forberance to the bereaved family to bear by the great loss.

Khyber Pakhtunkhwa CMMahmood Khan, in a statement, prayed to the Almighty for eternal peace to the departed soul and granting courage to bereaved family to bear this irreparable loss with fortitude.

Punjab Chief Minister Sardar Usman Buzdar, in his condolence statement, expressed a deep sense of sorrow and grief over the sad demise of Begum Shamim.