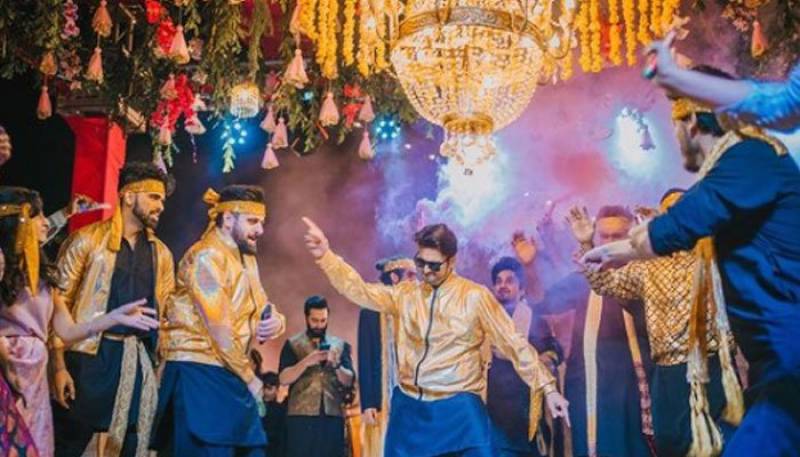 Usman Mukhtar and Zunaira Inam's wedding festivities have kickstarted and the internet is loving the sneak peeks from the festivities.

Last night the couple's fun-filled Mehndi ceremony won hearts but it seems that the handsome groom and his star squad were the life of the party.

Osman Khalid Butt and Ahmed Ali Akbar were joined by the groom himself and the groom side set the dance floor ablaze with their energetic dances.

The dance floor was further lit up by the bride and groom's family and friends. Here we have some of the memorable dance performances from the event.

The groom Usman Mukhtar was unstoppable as he entered with full swag amidst his friends and danced his heart out.

The Mehndi was full of celebrities with some star-studded selfies and photos clicked. The cast of drama serial Anaa was also clicked with the beautiful couple of the hour.

Grooving to peppy dance numbers, Osman Khalid Butt and Uzair Jaswal were the perfect best friends who set the dance floor on fire. Comments of admiration poured in as fans swooned over their killer dance moves.

The following video stole hearts as the gorgeous Zunaira made a beaming bride who danced and sang to her heart content. The sweetest video was adored by the fans and was went viral on social media.

Earlier, Mukhtar and Khan tied the knot at a nikkah ceremony in April. Their wedding functions are now being held around six months later.

Celebrity weddings in Pakistan are associated with an aura of colourful and cacophonous spirits and Usman Mukhtar's and ...