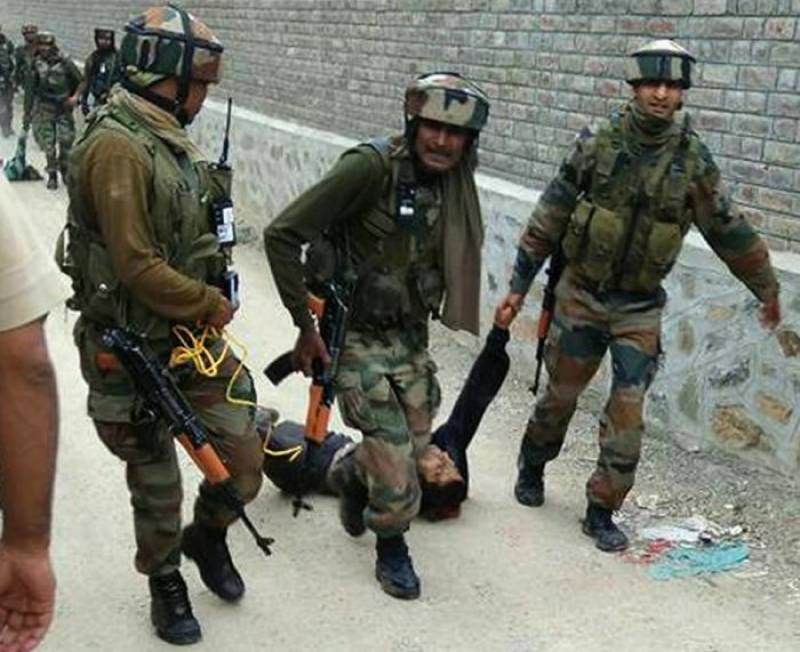 SRINAGAR - A teenage boy has lost his life after being subjected to inhumane torture by Indian troops at an army camp in the Pulwama district of Occupied Kashmir.

Yawar Ahmed Butt, 15, who was detained and tortured by the troops, was shifted to Srinagar's SMHS hospital in serious condition, but he succumbed to his injuries.

The victim family from Pulwama’s Chandgam town told the Kashmir Media Service (KMS) that the boy was detained and beaten by the troops at an Indian army camp in the held-Valley.

The family added that Yawar had confined himself to a room for the whole day. He did not sleep in his parents' room, as he would normally do. "Around 11pm, we saw him vomiting. He complained of headache, after which we took him to hospital in Pulwama," a family member said.

According to a family member, Yawar was asked to report to an Army camp in the Tahab area next day.

Locals in the area said that the Indian troops had earlier snatched the identity cards of several Kashmiri boys.

SRINAGAR – Indian troops in their unabated acts of state terrorism have killed three youth in the occupied region of ...

Meanwhile, normal life remains disrupted in the occupied Jammu and Kashmir due to continued military lockdown on 49th successive day.

Millions of people have been besieged in their houses as hundreds of thousands of Indian troops continue to be deployed in every nook and corner of the valley since the hardline Hindu government of Modi-led BJP stripped the disputed state of its special status on August 5.

The people are facing immense problems due to continued suspensions of communications means including internet and mobile phone services.

Delhi’s move to annex the Occupied Jammu and Kashmir has sparked widespread protests across the world, with more than sixty nations condemning the controversial legislation.

In the United States, Kashmiris, Khalistan activists and their sympathizers will hold anti-India protest demonstrations and rallies in Houston, Texas today (Sunday) on the occasion of Indian Prime Minister, Narendra Modi's visit.

Kashmiri and Khalistani activists have already made their presence felt with a dress-rehearsal of tractor-trailer trucks decorated with flags and protest signs.

The march which started from Sikh National Centre in Houston culminated at the NRG Centre, the venue of the Indian Prime Minister's public gathering.