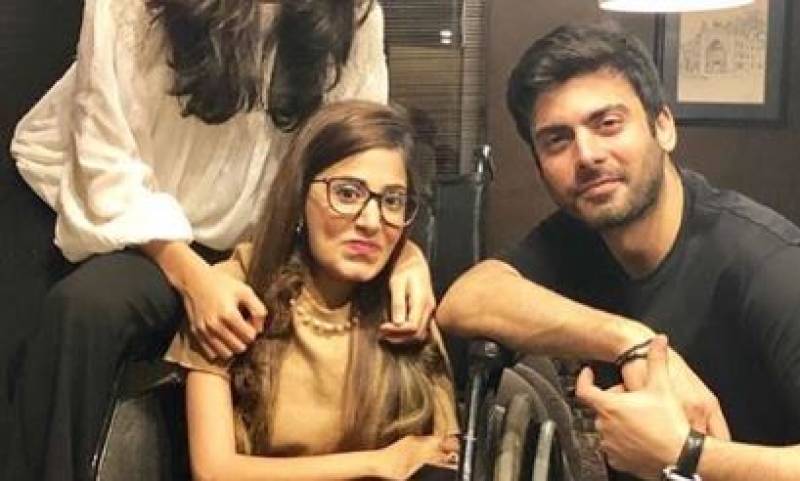 KARACHI - Fawad Khan is no-doubt the most popular Pakistani actor. The star is having a huge fan following not only in Pakistan but across the world too.

Fawad Khan is always seen having a great time with his fans at public gatherings. He always keeps his admirers in the loop of his busy A-lister life, and remains as humble as ever! He is busy sure, but never too busy to take time out for a fan.

As Recently, a die-hard fan of the Pakistani heartthrob Fawad Khan, Amna had shared her unforgettable experience and dream come true moment with the social media users on her Instagram handle that how pleased and happy she is meeting the humble and down to earth star on her birthday.

Amna got the chance of meeting her most favourite celebrity due to a well-wisher of her's who had made Amna's wish come true by first making it possible of sending an exclusive voice note of Fawad Khan wishing her a happy birthday and later made it possible for Amna to meet privately to Khan.

"Last night I had the most magical moments of my life. Those who know me they know how crazy I am about Fawad Khan. I’m literally always talking about him and obsessing over him like he’s my buddy ? This year on my birthday a well-wisher who knows me through social media reached out to me and gave me the BEST BIRTHDAY PRESENT EVER. " wrote Amna.

She further added that " She sent me a voicenote of Fawad Khan wishing me but to my surprise she had a bigger news. FAWAD KHAN WAS COMING TO KARACHI AND WANTED TO MEET ME FOR TEA (usnay merey pay chai nahi girnay di ❤️ reference: zindagi gulzar hai) I could not believe my eyes at that time because it was too good to be true. He invited me over to the hotel where he was staying in Karachi. When I was waiting for him in the hotel lounge I was super anxious because I was scared that what if he turns out be a disappointment? You know they know that you shouldn’t meet actors you fangirl over because it destroys the image you have of them in your head but I’m REALLY glad that he didn’t turn out to be one. He’s EXACTLY how I hoped him to be, down to earth and kind. Trust me, he was friendlier than I actually thought he would be. We chatted for about 2 hours (imagine TWO hours with Fawad sitting 5cm away from me) ?, joked around like we know each other since a while and shared thoughts over power of social media/other topics over tea.

She also expressed her views after meeting Fawad Khan candidly, saying that "In those two hours I realised that he’s just as human as we are. He’s not arrogant about his celebrity status but is super welcoming and humble. Even though he told me not to post anything on social media because he wanted our meeting to be private and not be seen as a publicity stunt I think this gesture of his deserves to be made public. It’s not everyday when you’re lucky enough to have tea with Fawad Khan. I still can’t believe that my dream came true. Thank you Fawad Khan for bringing the biggest smile on my face this month! ❤️ Love Amna  Your Crazy Fan! "

What did you think of the actor’s friendly gesture? Let us know in the comments box below.