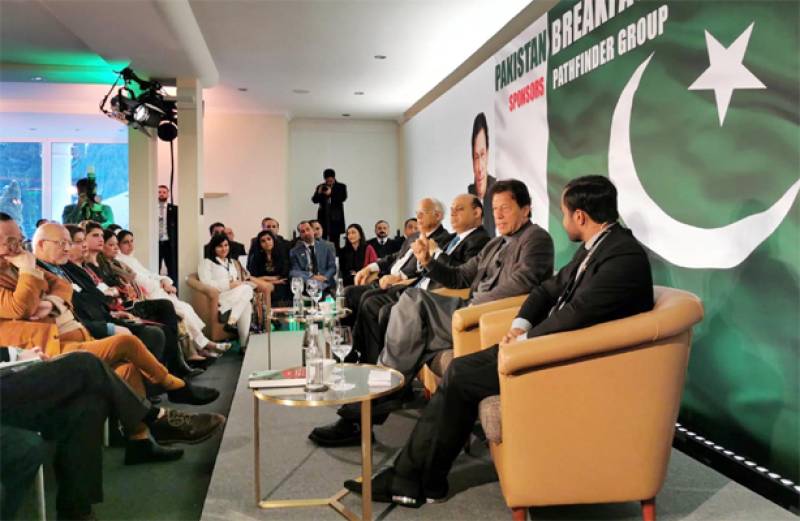 His comments come the same day the Transparency International issued the corruption perception index 2019 showing that Pakistan has dropped by three spots as compare to the last year's ranking.

Speaking at ‘Breakfast at Davos’, an event jointly organized by Pathfinder Group and Martin Dow Group on the sidelines of World Economic Forum in the Swiss resort, the prime minister: “It is like everyone wants to remove the tumor, but does not want to have the pain of surgery”.

He added that the moment nation realized the importance of good governance, the country would make progress.

He also shared his vision about Pakistan’s progress and related subjects including strategic vision, poverty alleviation and geopolitical balance.

The premier said big dreams lead to bigger achievement if supported by struggle and commitment.

“Going after a big mission, never ever think of compromising,” the prime minister said as he shared the main principle of his life, adding that he wanted the nation to never give up in difficult times and be patient.

He said that his vision for a strong Pakistan was revival of industries for wealth creation, to be spent on the uplift of underprivileged segments in a welfare-oriented society.

Prime Minister Imran Khan said the country’s founding and ideological fathers Quaid-e-Azam Muhammad Ali Jinnah and Allama Iqbal wanted Pakistan to be a humane and just society and vowed to set the direction of society on similar trajectory.

“Pakistan is about hope and I believe that with its immense potential and determination, the nation will thrive,” he added.

Stressing the importance of good governance, he said institutions could get deteriorated quickly, but their revival always took a lot of time and efforts.

He mentioned that foreign debts by previous governments resulted in putting undue pressure on common man and said he would soon take up the matter with stakeholders on how to reduce burden on electricity consumers.

“I am confident that Pakistan is on the right track,” he said, adding that staying steadfast during challenges was important to achieve goals.

He said Pakistan’s large human resource, its copper, gold and coal reserves and the most fertile land gave the country an edge to make progress, provided correct use of technology and advanced means.

Prime Minister Imran Khan termed overseas Pakistanis a “valuable resource” with capable minds and acclaimed expertise and expressed his desire to create a favourable environment for them within their homeland.

Once Pakistan ease-up and improve its business modalities and procedures, the foreign investment will come from overseas nationals with great prospects for the country’s development, he added.

The prime minister also shared his inspiration from the development models of China and Malaysia, saying Pakistan would like to follow these footsteps leading towards progress.

He said China wanted to relocate industries in Pakistan, as a major boost to the latter’s economy with possibilities of development sky-high.

He said tourism sector of Pakistan had big potential to attract followers of ancient civilizations from around the world.

Martin Dow Group for sponsoring the event in expensive Davos, saying, he would

not have otherwise burdened the national exchequer.

“This is the cheapest official visit to Davos unlike those by former rulers,” he said.

He recalled that his trip to United Nations General Assembly last November was the least costly with $160,000 as compared to President Asif Zardari’s 1.4 million expenditure, Prime Minister Nawaz Sharif’s $1.3 million and even $800,000 of prime minister Shahid Khaqan Abbasi.

Imran Khan emphasized on uplift of underprivileged segments of society, which he said proved their mettle when given proper opportunities and platform.

He said the Namal University, set up by him, provided quality education to poor boys and girls to help them enter the mainstream in society.

“It is the drive that actually pushes the people to accomplish and the people with humble background, have enough potential to make their mark if given support and encouragement,” he said.