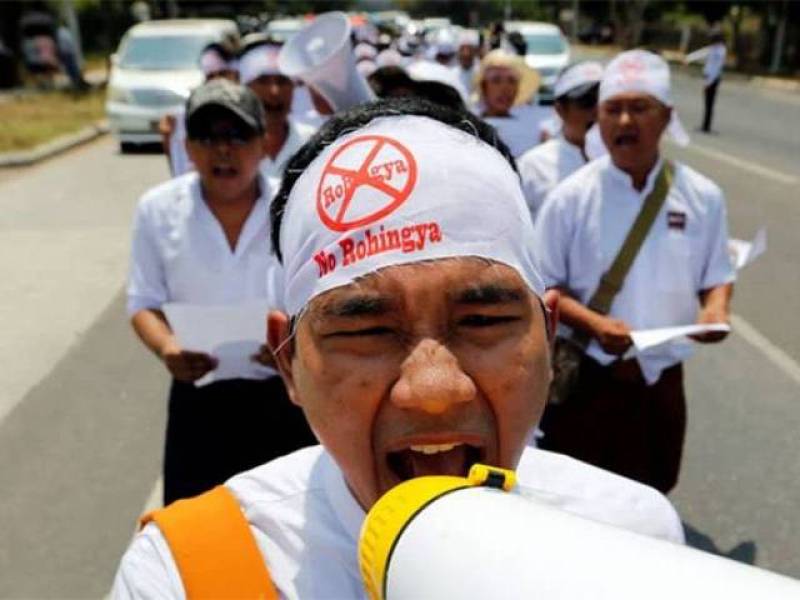 NAYPYIDAW, Myanmar (Web Desk) -  The brutal campaign of ethnic cleansing against Muslims by Buddhists has reached Thaungtan village in Myanmar, which has a new entrance sign that reads: “No Muslims allowed to stay overnight. No Muslims allowed to rent houses. No marriage with Muslims.”

According to media reports, the sign was set up in March by Buddhist residents of the village in Myanmar’s Irrawaddy Delta region, who signed a document stating that they wanted to live separately, The Guardian reported on Monday.

Earlier on Sunday, Aung San Suu Kyi, the country's elected leader and Nobel laureate, warned against use of the word “Rohingya” to describe the persecuted and stateless Muslim minority, saying that its use could inflame communal tensions in Myanmar.

Suu Kyi said her new government was determined to address deep-seated communal tensions in western Rakhine State, where tens of thousands of Rohingya are confined to squalid displacement camps after waves of deadly riots by local Buddhists in 2012.

Buddhist nationalists have staged protests across the country against using the term Rohingya.

They label the group “Bengalis”, casting Myanmar’s more than one million Rohingya as illegal immigrants from Bangladesh.

The words carry “all kinds of political and emotional implications which are unacceptable to the opposite parties,” she added.

Suu Kyi, who has faced criticism internationally for not speaking up for the Rohingya, pledged to work towards a situation where the communities “live peacefully and securely outside the camps”.

“That is why we say that we need the space to build up trust and security within the community”, Suu Kyi added.

The new government has been trying to find a solution that is acceptable for all, she explained.

Myanmar’s Rohingya population are denied citizenship even though many can trace their roots in the country back generations.

Earlier, US Secretary of State John Kerry praised his counterpart for her approach towards the incendiary issue.

“At the same time we all understand as a matter of fact that there is a group here in Myanmar that calls itself Rohingya,” he added.

The US says it backs the rights of all ethnic groups to identify as they wish.

In recent weeks Washington has come under pressure from hardline Buddhists after the US embassy used the term “Rohingya” to refer to the persecuted Muslim minority.