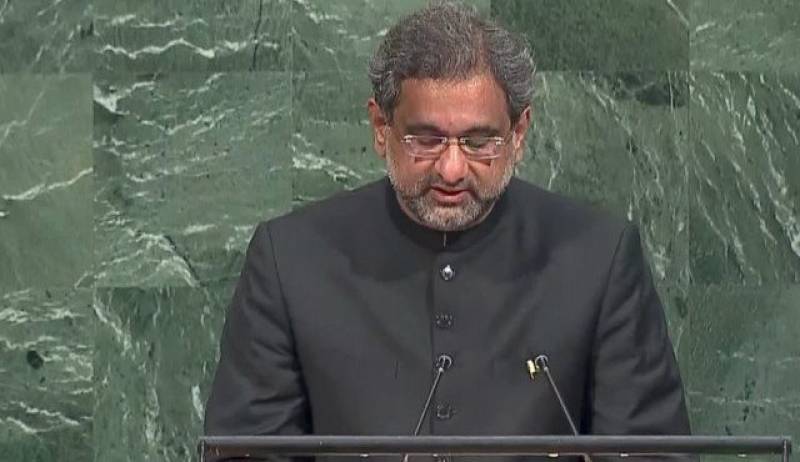 LAHORE - India is on fire as is reflected from its reaction at the annual session of United Nations General Assembly in which it adopted childish name-calling tactics to counter the forceful speech of Prime Minister Shahid Khaqan Abbasi.

India could not digest Abbasi's speech in which he accused India of "war crime" in the occupied Kashmir as it vomited up dire criticism by naming Pakistan as "Terroristan".

Speaking at the world body, India’s First Secretary to the UN Eenam Gambhir said: “In its short history, Pakistan has become a geography synonymous with terror. The quest for a land of pure has actually produced 'the land of pure terror'. Pakistan is now ‘Terroristan’, with a flourishing industry producing and exporting global terrorism”.

He was not shy to publicly name the India for its involvement in the "campaign of subversion and state sponsored terrorism against Pakistan, including from across our western border".

The relation between both arch-rival nuclear powers have tensed due to the disputed territory of Kashmir for which they are fighting since their birth.

India's Prime Minister Narendra Modi's aggressive behaviour against Pakistan also added fuel to the fire. He has been trying since holding the office of branding the country as sponsor of terrorism.

The PML-N government, especially Nawaz Sharif, has been subjected to criticism for allegedly having a soft corner for the rival country.

But, the incumbent prime minister of PML-N, who according to some observers remained forthcoming as compared to his predecessor, gave a strong reply to India during his address countering the Indian narrative. He said, "Pakistan has faced unremitting hostility from its eastern neighbor" since its creation.

He also urged "the international community to call on India to halt pellet gun attacks and other violence against unarmed demonstrators; stop the use of rape as an instrument of state policy; end media blackouts; rescind its draconian emergency laws; and free all Kashmiri political leaders".

The premier also drew the world's attention towards tension at the Working Boundary saying, "To divert the world’s attention from its brutalities; India frequently violates the ceasefire along the Line of Control in Kashmir. Despite over 600 violations since January this year Pakistan has acted with restraint".

He also waned, "If India does venture across the LoC, or acts upon its doctrine of “limited” war against Pakistan, it will evoke a strong and matching response".

Apart from his remarks on Kashmir, the Prime Minister took a clear stand on its policy regarding Afghan conflict by denying to be a "scapegoat" in anyone's war.

He added, "Pakistan is not prepared to do is to fight the Afghan war on Pakistan’s soil. Nor can we endorse any failed strategy that will prolong and intensify the suffering of the people of Afghanistan and Pakistan and other regional countries".

Analysts and former diplomats have appreciated Abbasi for presenting Pakistan's stance regarding war against terrorism strongly and warning the world that the country could not be a ‘scapegoat’ for failing in Afghanistan.