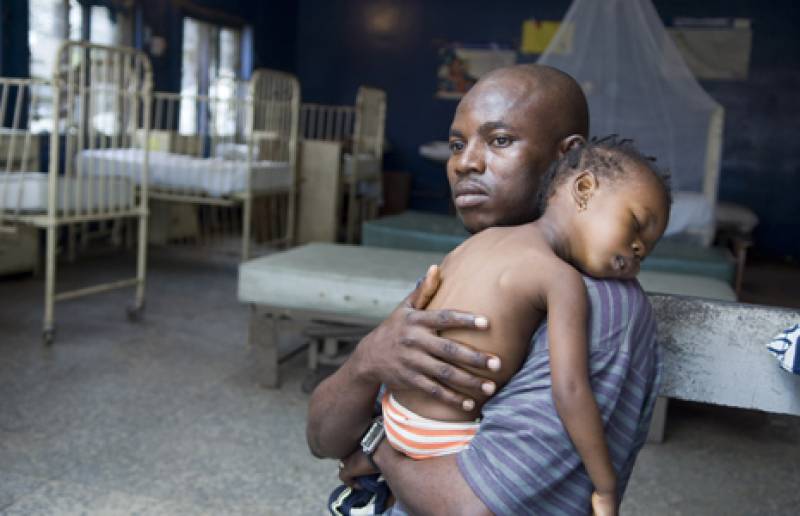 NEW YORK (Web Desk) – The United Nations Children's Fund (UNICEF) said Thursday that malaria kills more than 1,200 children a day across the world, despite a 40 percent drop in child deaths from malaria since 2000.

The UN agency released its "Facts about Malaria and Children" ahead of World Malaria Day to show the extensive impact of the disease on children and on pregnant women around the world.

"With a 40 percent reduction in child deaths from malaria since 2000, this year's World Malaria Day is an important marker in how far we have come," said Dr. Mickey Chopra, UNICEF's associate director for programs, and chief of health.

"However, the deaths of close to half a million children a year are a sobering reminder that without increased efforts and investments this disease will remain a challenge to us all for a long time to come," Chopra said.

According to the latest report by the World Health Organization (WHO), malaria mortality rates have decreased by 47 percent worldwide and 54 percent in Africa alone since 2000. Since 2001, it is estimated that more than four million malaria-related deaths have been averted, approximately 97 percent of which have been children under five.

Some 584,000 people died worldwide in 2013 from malaria, with 90 percent of these deaths occurring in Africa. In all there were approximately 198 million cases of malaria worldwide.

Although child deaths from malaria dropped significantly since 2000, children under five still represent 78 percent of global malaria deaths, or 456,000 per year. This means more than 1,200 children die every day from malaria, about 50 children every hour.

Between 2001 and 2013, 4.3 million lives were saved by improved access to malaria prevention, diagnosis and treatment. Of these, 92 percent (3.9 million) were children under five in sub-Saharan Africa.

Protecting pregnant women is crucial in the fight against malaria. Malaria in pregnancy contributes significantly to deaths of mothers and young children, estimated to amount each year to 10, 000 women and up to 200,000 infants under one year old.

Strategies to prevent malaria in pregnancy are simple and inexpensive: intermittent preventative treatment (IPTp) costs 12 cents per dose (less than 50 cents for the full course of four doses) and Insecticide Treated Bednets (ITNs) now cost only five U. S. dollars, including delivery.

Administering IPTp during antenatal care can reduce neonatal mortality by 31 percent, and low birthweight by 43 percent. However more than three out of four pregnant women in endemic countries in sub-Saharan Africa do not receive IPTp, which translates to approximately 28 million live births in 2014 that were not protected against malaria.

While being richer increases the likelihood of receiving preventive treatment for malaria during pregnancy, overwhelmingly pregnant women in malaria-endemic countries do not receive the recommended care, whether they are rich or poor. More than 70 percent of the wealthiest women and 80 percent of the poorest do not receive care.

In some countries, IPTp coverage in rural areas is half or less that in urban areas: In Togo, two out of three urban women receive treatment, versus one out of three rural women. In Senegal, Mozambique, Guinea, Burkina Faso, and Chad, rural coverage is half that of urban coverage.

World Malaria Day is commemorated every year on April 25 and recognizes global efforts to control malaria. Globally, 3.3 billion people in 106 countries are at risk of malaria. In 2012, malaria caused an estimated 627,000 deaths, mostly among African children. Asia, Latin America, and to a lesser extent the Middle East and parts of Europe are also affected.

World Malaria Day was established in May 2007 by the 60th session of the World Health Assembly, WHO's decision-making body. The day was established to provide "education and understanding of malaria" and spread information on "year-long intensified implementation of national malaria-control strategies, including community-based activities for malaria prevention and treatment in endemic areas."

World Malaria Day allows for corporations, multinational organizations and grassroots organizations to work together to bring awareness to malaria and advocate for policy changes.

"No child should die of malaria. No child and no pregnant woman should be denied access to effective and readily available treatment because of where they live, or how poor they are," Chopra said. "Deaths from malaria are preventable and it is up to all of us -- governments, the international community, health professionals, or donors -- to put measures in place to defeat this devastating disease once and for all."