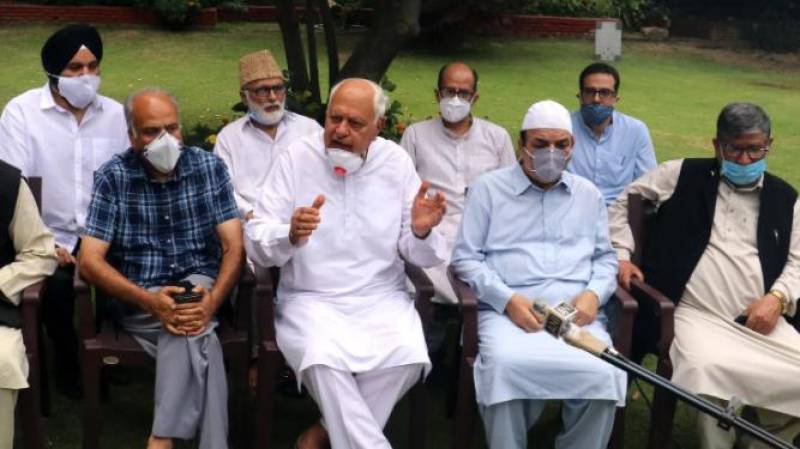 SRINAGAR – Six major political parties in Indian occupied Jammu & Kashmir have pledged a combined effort calling for the revocation of Article 370 imposed by the Modi-led government in Centre a year ago.

In the resolution termed "Gupkar Declaration-II", the parties said there can be "nothing about us without us" in Jammu and Kashmir, calling the abrogation of special status of the erstwhile state as a "spitefully shortsighted" and "grossly unconstitutional" move.

The Gupkar Declaration-II has been signed by National Conference president Farooq Abdullah, Peoples Democratic Party (PDP) chief Mehbooba Mufti, Jammu and Kashmir Congress chief GA Mir, Peoples' Conference leader Sajjad Lone, and others. This is the first combined statement issued by the political parties after more than a year.

The resolution added, that the group is committed to strive for the restoration of Articles 370 and 35A, the Constitution of J&K and the restoration of the state, adding that measures by the centre were "grossly unconstitutional" and attempt to redefine the people of the the former state.

Acknowledging the difficulties in bringing out a resolution of all political parties, it said the signatories to the Gupkar Declation-I, signed on August 4, 2019, "have barely managed to establish basic level of communication with each other" in the face of a series of prohibitive and punitive curbs imposed by the Indian government, aimed at impeding all social and political interactions.

The limited confabulations held within the constraints imposed have resulted in this unanimous resolution, it added.